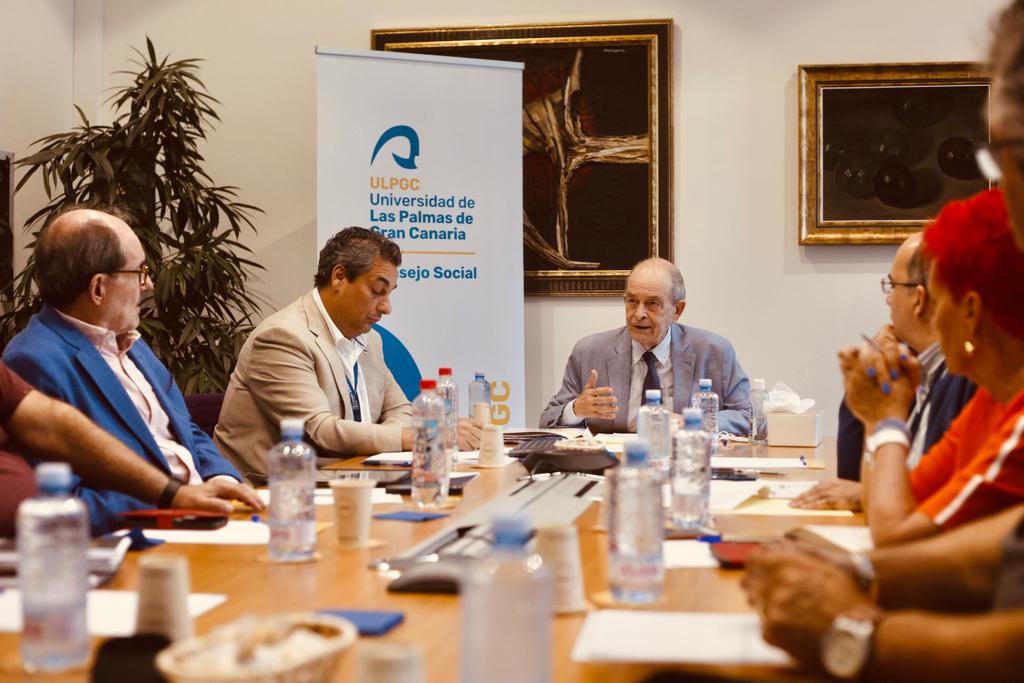 Its chairman, Ángel Tristán Pimienta, stated that in its current form the LOSU [University System Act] draft bill “will be a permanent source of conflict”

“Spain cannot miss this opportunity to modernise its public university system, for which broad parliamentary consensus is essential in order to improve the draft bill and respond to current and future demands” the chairman of the ULPGC Social Council, Ángel Tristán Pimienta, stated during the extraordinary plenary session held on Thursday to appraise the report on the University System Act (LOSU) draft bill by the Executive Committee of the Conference of Social Councils of Spanish Universities’.

Tristán Pimienta began by stating that, broadly speaking, this draft bill “far from becoming more in line with Europe, distances itself. This should be a law for the university which comes from society, allowing universities to take on their role with assurances, of which perhaps the most important is the future stability and great challenges ahead for Europe and science”. Moreover, he stated that alignment with Europe and especially with the most advanced countries in terms of university reform is an “inescapable goal”. “It is necessary to go in the same direction as the European Union and not against the tide. The future, obviously, is always ahead of us”, he stated.

During his remarks he recalled that on 29th November 2021 a project undertaken by the OECD entitled ‘Hoja de ruta para la mejora de la transferencia y de la cooperación entre ciencia pública, universidades y empresas’ [Roadmap for improving transfer and cooperation between public science, universities, and businesses] was submitted to the Spanish National Research Council and its conclusions were a requisite starting point for any reform. It was the Spanish government itself, through its Ministry of Science and Innovation and its Ministry of Universities, which asked the European Union Directorate-General for Structural Reform Support for a report. The European Union commissioned the OECD through a competitive tender process and nearly 100 people and institutions were involved.

In his opinion, some of these conclusions are able to act as a ‘compass’. “Nowadays, university governance leaves little room for society to participate in defining universities’ remits, which should emulate the reforms carried out in European countries which have effectively given a voice to external actors in university strategic planning, increasing their levels of institutional autonomy and accountability”.

Regarding Social Councils, Ángel Tristán stated that “their role and skills [must be] genuinely strengthened, in order to ensure they have the sufficient resources and autonomy to fulfil the roles they have acquired”.

In his view, “the unique nature of the system of participation and representation within the Spanish university governance model places the Spanish university system at a disadvantage when responding to current social and economic challenges”. Regarding the ‘new governance’ he said that universities have enough reports pointing in the same direction“some of which talk of the Spanish ‘exception’ as almost like a bubble”.

Tristán Pimienta referenced two highly significant recent studies, one of them ‘La reforma de la gobernanza en los sistemas universitarios europeos’ [Governance reform in European university systems] which analyses and compares the cases of Austria, Denmark, Finland, France, the Netherlands, and Portugal – with each other and with Spain – and among whose conclusions it is stated that “a high level of involvement from people outside the university is observed in the university governance of all these countries, generally in supervisory or administrative councils with common responsibilities at their core: approval of the budget and its settlement, approval of the strategic plan, and the appointment of the rector”.

In this report it is also observed that, in the same way that university autonomy has increased regarding resource management, government control has increased at the same time through systems of indicators and target-based funding agreements. “The size of the governing bodies, among them entities which are equivalent to the claustro or senado [the highest representative body], has reduced. As a general rule, the rector is appointed by the governing body and, in some countries, the deans are appointed by the rector”, explained Ángel Tristán.

Regarding a recent CRUE [Conference of Rectors of Spanish Universities] document, the 2021 monograph ‘Órganos de gobierno y representación en la Universidad: análisis en el contexto europeo’ [University governing and representative bodies: An analysis in the European context], he said these questions are also addressed. “The reports all recommend the reduction and resizing of collective entities and recommend the creation of a Primary Governing Body, leaving the claustro as an entity which gives advice and opinions regarding both academic questions and strategic courses of action”.

Agreeing with the statements of the Conference of Social Councils’ chairman, Antonio Abril, its executive committee, and its assembly, Tristán Pimienta also believes that “the LOSU draft bill could be a new missed opportunity given that it still does not address the transformation of the current university governance model”.

The highest academic authority could be selected directly or indirectly or otherwise appointed by the new Primary Governing Body, however, “the Subirats Bill not only does not contemplate any of these recommendations, but also aggravates the situation by creating more entities and increasing the size of existing ones. If the vast majority of reports from recent years believe that governance in the Spanish university system is dated and anachronistic, a bubble about to pop, then at the incredibly dynamic and competitive present time, fundamental problems, which are far from a part of the solution, not only remain but also escalate”.

He recalled that the university lecturer Mr Castells had considered two alternative methods for the appointment of rectors: direct election with universal suffrage, which is the current method; and election “by a specific entity” which in practice would fuse the governing board and Social Council. Of the members of this entity, 50% (20-30) would be teaching and research staff, 1% students, 10% administration and services staff, and 30% people from outside the university of academic, cultural, social, business, or institutional renown”.

Tristán Pimienta added that, in its current form, the Subirats Act would be “a permanent source of conflict due to its meeting-oriented nature and the merged power of its internal forces”. He also stressed that in the view of the chairman of the Conference of Social Councils, “we find ourselves with a draft bill that will not do in order to achieve the excellent university system that Spain needs, capable of responding to the demands of a 21st century higher education public service”.

The chairman of the ULPGC Social Council recalled that the Canary Island Statute of Autonomy provides for important university-related powers and that this region’s Social Councils Act continues to be “the most advanced in Spain”, both in terms of the autonomy of the entity in charge of university government and in terms of the greater powers for internal monitoring under the law, as recognised by the Court of Auditors which has cited us as a national model. “We trust that the region remains committed to its aim for public universities to ‘take a large step forward’ towards Europe” he said during his remarks. He also recalled that paragraph b) of article 134 of the Statute of Autonomy, which is an Organic Law [provided for in the Constitution relating, among other issues, to the implementation of fundamental rights], outlines that “the legal system for the organisation and running of public universities, including governing and representative bodies, is the responsibility of the Canary Islands region, along with many other university-related powers, which is a reason to keep faith”,  Ángel Tristán stated.