Félix Sanz Roldán: “When the war in Ukraine ends and the new global world order begins, Russia must be treated as a political pariah” 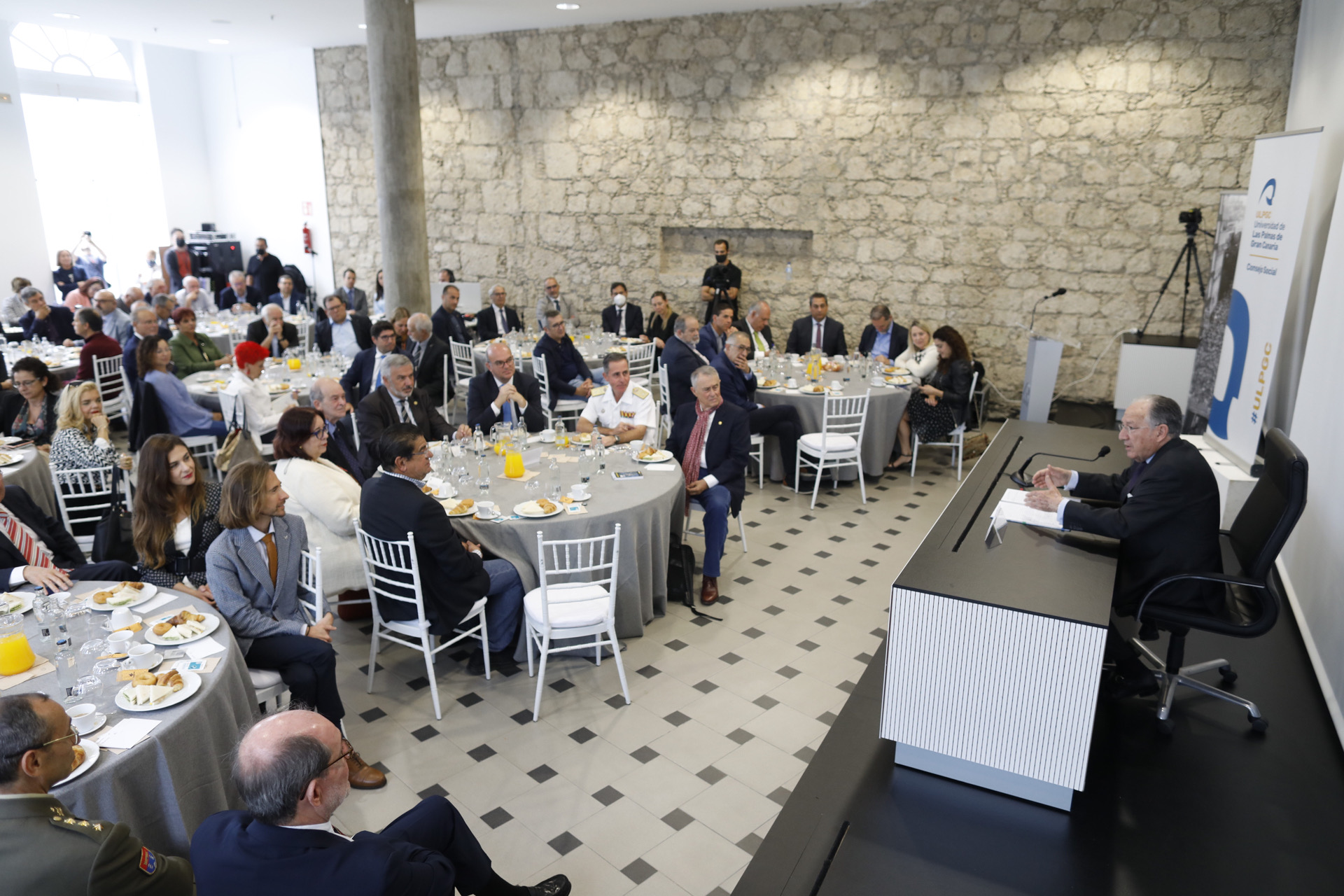 The chairman of the Universidad de Castilla La Mancha’s Social Council and former director of the CNI [Spanish Intelligence Agency] gave the lecture “Towards a New World Order”.

This event bought together 90 guests, authorities, entrepreneurs, and ULPGC teaching staff who came to the institutional headquarters’ Aula de Piedra to listen to the former director of the Centro Nacional de Inteligencia [Spanish Intelligence Agency] (2009-2019) and former Chief of the Defence Staff (2004-2008), who gave the lecture “Towards a New World Order”.

The chairman of the ULPGC Social Council, Ángel Tristán, introduced the guest speaker and during his remarks stated that we are “terrified by Russian cruelty in Ukraine. We no longer live in a world of certainty, but rather one of uncertainty, plagued by fear. The Russian foreign minister, Lavrov, says he does not rule out a Third World War. And I think of Albert Einstein when he said that he did not know what a Third World War would be like, ‘I only know that the fourth will be fought with sticks and stones’. I don’t know if soldiers experience the same, but many nights I need to take Lexatin in order to sleep”, he added.

Tristán Pimienta explained that the University can do many things in order to understand this conflict, as “our role is to think, to study, to research, to debate, albeit without a reduction in teaching”. He also explained that it was at the general assembly of the Conferencia de Consejos Sociales de las Universidades Españolas [ Conference of Social Councils of Spanish Universities] that he ran into General Félix Sanz Roldán, “an enlightened soldier, a wise and good-natured man with a notable quality – which I will be honest General and say I have taken advantage of– that he is delighted to participate in all forums where he can impart his knowledge on all areas related to defence, security, and intelligence”.

For this Breakfast Lecture the tables were named after Ukrainian regions, in solidarity with the situation the country is experiencing in the face of Russian invasion. Sanz Roldán spoke precisely about this issue and said that when the conflict ends, Russia must be treated as a ‘political pariah’ given that, when the new order begins, it will be necessary to ask who will do business with Russia”.

Félix Sanz Roldán said that in his speeches he always talks about a book that he has often consulted frequently: “Diplomacy” by Henry Kissinger, “who was a historian and diplomat and can illuminate the topic of international relations, a euphemism for diplomacy”. In the book he explains, among other issues, that “while we search for a new concept of world order within which to live safely, the only thing we find is the creation of conflicts out of human control”.

He recalled that “since 12th August 2021 we have had two world orders and we are on the brink of having a third, but we have called all of these the new order, tallying with what Henry Kissinger said: that every new order is short-lived”.

He defined order as the balance of power. However, the long definition would be that “order has been used in multiple political units, generally States, which do not have the sufficient strength to defeat the rest, living under contradictory philosophies or different internal practices for which rules, that they respect, have been created to regulate their conduct ”.

In his opinion, “the origin of all this is the treaty of Westphalia, the most quoted historical document when talking about world order which is also quoted nowadays when talking about the armed conflict in Ukraine, as the signing of this treaty in 1648 recognised national sovereignty, the inviolability of boarders, and national interest”.

“But, there is also the Helsinki Act passed in Madrid in 1975, which is currently in force and which is the document that I have most championed during my life, especially in the NATO negotiating committee. This document talks of open trade, the rules for conflict resolution, and some limits regarding the waging of war and, in this way, we have had a certain sense of order”, he stated. During his assessment of the current world order he said that the world has become smaller, “but the number of spheres has been growing and clashes are almost inevitable”.

He highlighted that the first rapprochement between the USA and China after many years with no contact took place in 1971. “And nowadays, with the arrival of the technological revolution, the world is very small and there is nothing that politics can hide from people, we are experiencing the continuous movement of spheres, in a world experiencing many changes, which Félix Sanz summarises as ‘the fight for power’”.

Regarding matters which generate instability, there are “populisms, as there are those who go as far as to say that I can solve problems in one minute and I don’t need the law” and also the use of disinformation as a destabilising element. “Cybersecurity is a very cheap and discrete weapon”, he added.

During his remarks he recalled that on 12th August 2021 the Unites States withdrew from Afghanistan as they said that they did not want to be a leading figure in world order, but they have had to return to Europe in the face of the Russian offensive in order to lead the resolution of another military problem.

Regarding the situation in Ukraine, he commented that nothing justifies the killing of women, children or the elderly, or the cases of torture. “This is a terrible war and however long it lasts it will be the beginning of a new order and everything points at it being long as the people of Ukraine are going to do everything they can to defend themselves ”. In a meeting of 193 countries, 140 denounced Russia, but only 37 showed their support for imposing sanctions. That is to say, that 156 countries are not willing to sanction Russia.

“When all is said and done, what will remain is a ‘bipolar world led by the development of new technologies, dominated only by the USA and China. China does not want to raise its flag anywhere but does wish to open shops. And nor can it do so with someone who has levelled a country”, he stated.

Regarding the use of nuclear weapons, Sanz Roldán explained that “they emerged so that some could not use power against others, but never have nuclear weapons been thought of as a fundamental element in an attack. However, they are now making us think that this is possible. During the management of this crisis, the rhetoric increased so much that there came a moment when it became inevitable that Putin would have to do something. I cannot process what the world will be like after a nuclear explosion and that is why I prefer to make every effort to avoid it”.

In each edition of this social and cultural initiative, the ULPGC Social Council invites prominent figures within the national and international university sphere to address a current issue or an issue related to the role and objectives of higher education institutions in Spain, with the aim of strengthening their presence and position within society.

To conclude, Ángel Tristán read out the questions and issues put forward by those invited, which they had previously written on cards, to which Sanz Roldán responded with the discretion which characterise him as a former head of the CNI.