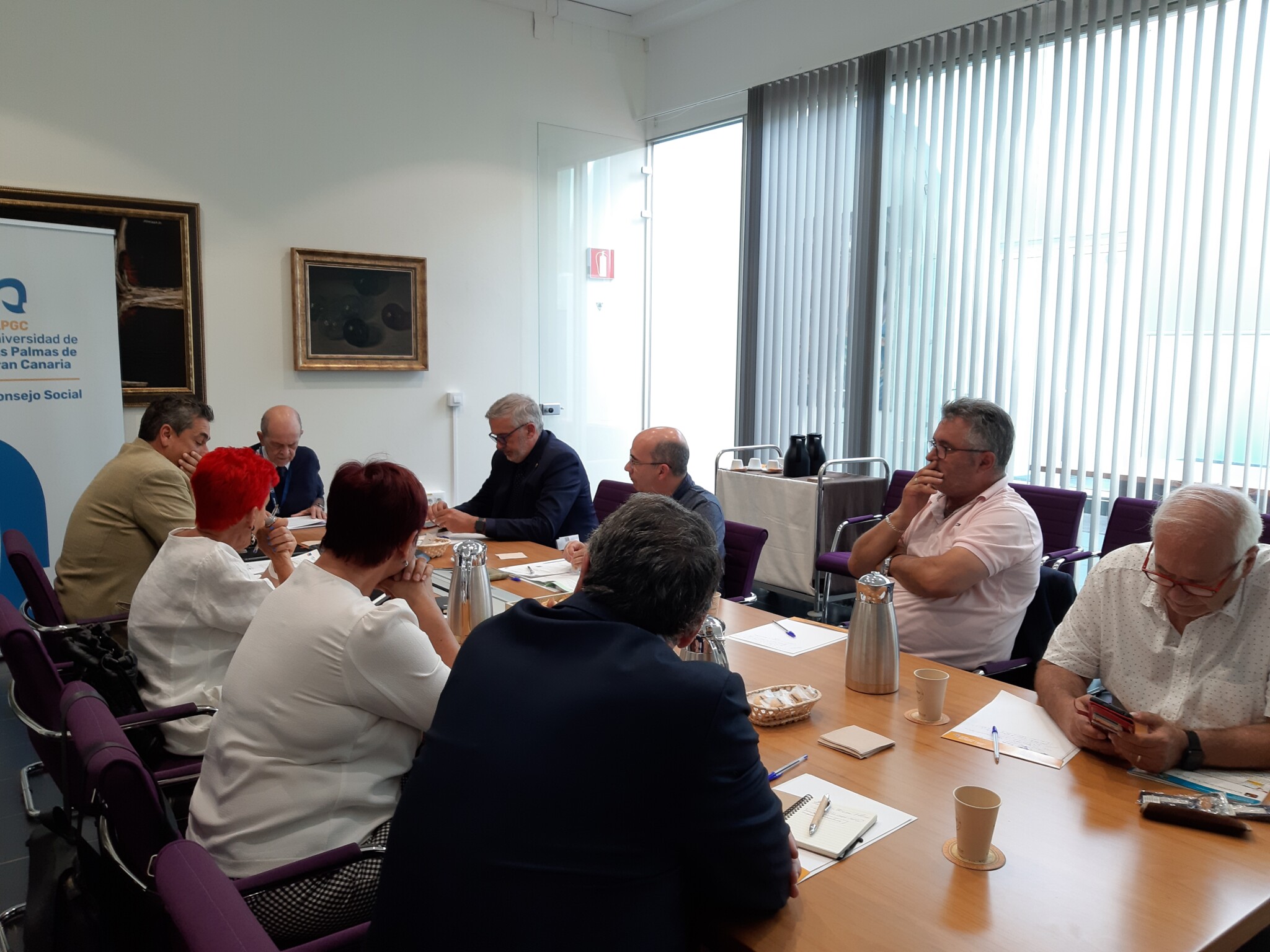 At the ordinary meeting, Ángel Tristán announced various actions and initiatives, such as the second edition of the Canarias Importa [The Canary Islands are Important] project.
The manager, Roberto Moreno, reported on the launch of the new online platform, remote working measures, analytical accounting, and the standardisation of wages for 128 posts, among other issues.

The ULPGC Social Council held its first ordinary plenary session of the year in order to address various matters of interest, in addition to the presentation of reports by its chairman, Ángel Tristán, and the ULPGC manager, Roberto Moreno.

During his remarks, Tristán Pimienta expressed his “satisfaction with the good rapport and the honest and mutual cooperation with the rector, Lluís Serra, and his governing team and with the manager, Roberto Moreno, and his colleagues, who have understood and taken on the role of this Social Council”. In this respect, the chairman of the Social Council mentioned various areas which he is particularly pleased with, “such as the Mentoring Plan to attempt to save students from failure”.

He also highlighted the introduction of the Alumni Association and the signing of an agreement between the University and the Confederación Canaria de Empresarios [Canary Island Confederation of Entrepreneurs] which in his view is “crucial in designing the training required by the fast-paced world of the great digital revolution”. The plenary also approved the renewal of the agreement with the Confederación Canaria de Empresarios that supports the Cátedra del REF [Organisation for the Economic and Fiscal Regime of the Canary Islands], which was created in 2014 at the Social Council’s proposal.

Regarding work on institutional cooperation he mentioned the creation of the Canarias Importa initiative, of which there will be a second edition “because the Canary Islands are still important to us”.

Similarly he referenced other planned activities such as holding a national forum on the EU Next Generation funds for European recovery and fraud detection measures in public universities, organised in cooperation with the Conferencia de Consejos Sociales [Conference of Social Councils] as part of the 30th Universidad de Verano de Maspalomas. These sessions will feature a panel of speakers comprised of representatives from the EU and Spanish Court of Auditors, various syndicates and regional auditing agencies, as well as officials from the Ministry of Universities and the Ministry of Science and Innovation.

Continuing his report, Tristán Pimienta referenced a visit to the Fuerteventura and Lanzarote campuses, noting that the Social Council will continue discussions with the respective Island Councils and city councils in order to give the required impetus and to provide them with suitable spaces and accessibility.

With regard to the LOSU [University System Act] and the meetings held in recent weeks, he alluded to the meeting with the minster of universities, Joan Subirats, in which the rectors of the ULPGC and ULL also participated. In this meeting, Ángel Tristán conveyed to the minister the opinion of the Conferencia de Consejos Sociales regarding the new law, which “is dated at birth by not taking into account the OECD recommendations for the structural reform of Spanish university governance”. Likewise, Tristán reported that he also participated in a virtual extraordinary meeting of the Conferencia de Consejos Sociales’ executive committee, alongside its general secretary Miguel Ángel Acosta, in order to finalise the amendments to be proposed for the LOSU draft bill.

He concluded his report highlighting the ongoing cooperation between the Social Council and the ULPGC rector’s office which has succeeded in increasing the number of grants aimed at students wishing to begin research tasks which are compatible with their studies. He also announced that a new edition of the Breakfast Lectures will take place on 22nd July with the contribution of the lecturer Mateo Valero, honorary doctor of the ULPGC, who will talk about a topic that is incredibly important at this time: the chip.

He concluded by explaining that, up until January 2022, 182 audit reports were processed as part of internal monitoring activities.

In turn, the Social Council manager, Roberto Moreno, reported on the launch of the new online platform, the processing of files, and the single digital archive. With regard to Human Resources he highlighted the measures which allow for remote working, giving 128 civil servant positions equal status with their counterparts, the advertising of extraordinary public sector job vacancies which aim to make temporary posts permanent, the project for bringing together departmental administrative staff under the same roof, the new tender for an electricity provider, and the introduction of analytical accounting.

Roberto Moreno explained that around 25 new procedures are being included each week, going from only one immediate response procedure at the beginning of March to the 14 currently in place. There has been a reduction of approximately 95% in the use of paper in administrative procedures.

Moreno highlighted the Governing Board’s approval of the extraordinary public sector job vacancies which aim to make temporary posts permanent, in line with Act 20/2021. Likewise, he reported that the extraordinary public sector job vacancies approved by the ULPGC include 6 positions to be filled through a process using both entrance exams and taking into account individual merits, with another 193 filled through a merit-based selection process. Additionally, he mentioned that the specific amendment to the document stipulating information concerning jobs within the university [Relación de Puestos de Trabajo], allowing for the salaries of 128 administration and services staff posts to be made equivalent to their counterparts at the ULL and in the regional government, was published in the Canary Island Official Gazette in May.

He expressed his concern regarding electricity billing and explained that, after the corresponding public tender was unfilled and in the face of the increasing costs of electricity, they brought a proposal to the Dirección General de Planificación y Presupuestos [Directorate General for Planning and Budgeting]. This proposal is for taking the necessary legal measures to allow both universities to record this cost overrun, the ULPGC annual estimate for which is more than 2.4 million euros, as an acceptable deficit.

Regarding the development of work to implement analytical accounting, he reported on membership to the Sistema de Contabilidad Analítica Normalizada para las Organizaciones Administrativas [System for standardised analytical accounting in administrative organisations] (CANOA) programme, based on a standard accounting model that can be customised for each entity, which allows the cost of activities undertaken by different units to be assessed. It also provides information aimed at analysing the use of public resources and facilitating the adoption of decisions regarding the production of goods and services, and setting public fees and rates.