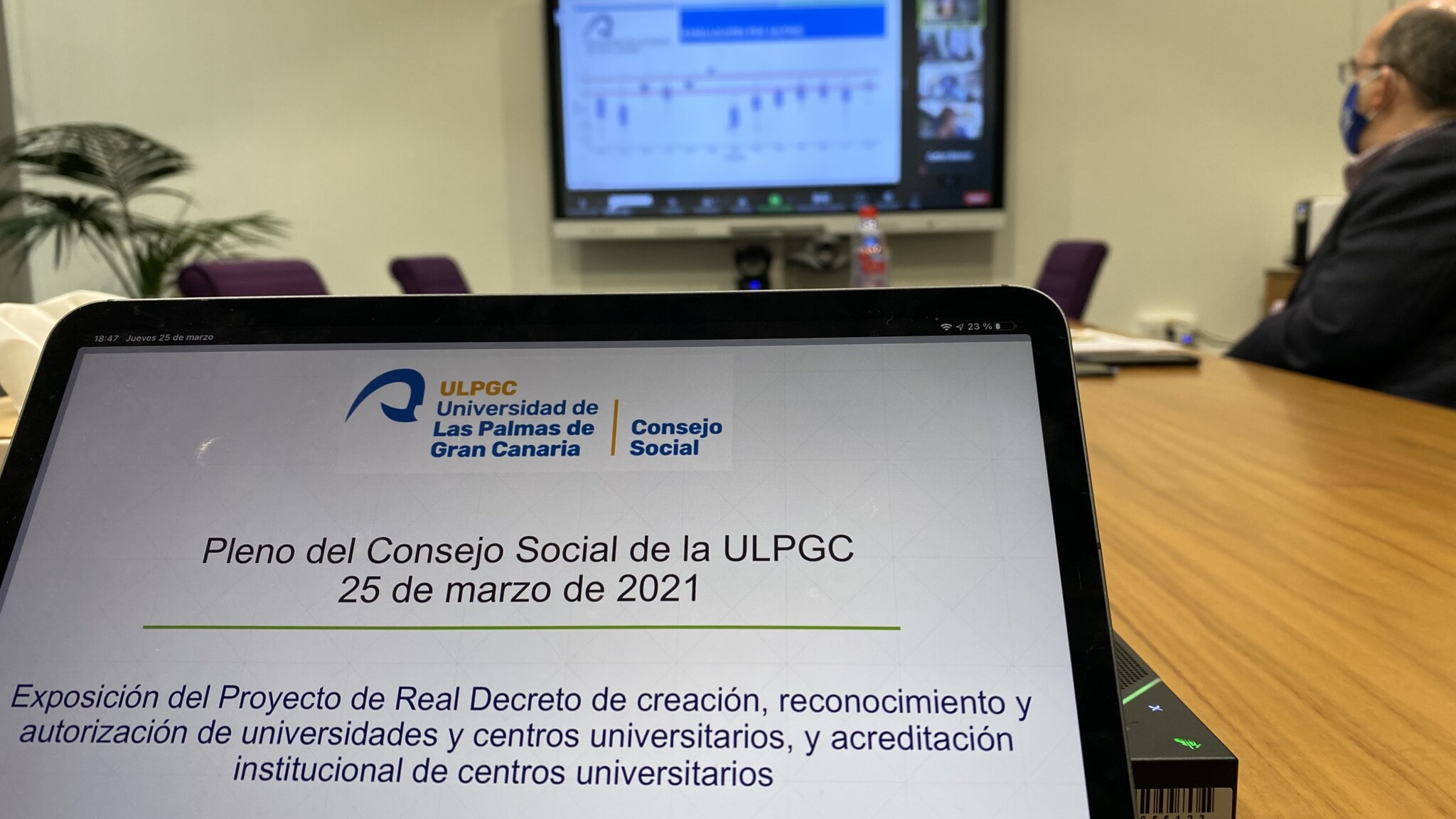 The Social Council and the rector agree in their assessment that the main problem which will prevent the majority of universities from meeting the new requirements “are cuts made in previous years, which have affected the replacement rate among teaching, research, administration and services staff” and express their willingness to reverse this in the next 5 years.

The ULPGC Social Council has expressed its support for and cooperation with the new ULPGC rectoral team in order to meet the requirements set out in the draft Royal Decree being prepared by the Ministry of Universities. This Act establishes the essential requirements for the creation, recognition and authorisation of universities in Spain and is expected to replace Royal Decree 420/2015, which is currently in force.

During an extraordinary plenary of the Social Council, Rector Lluís Serra stated that the draft Royal Decree establishes a five-year period within which to comply with the new prescribed requirements and that “the current situation is, in part, the result of the policy of cuts which has been applied to universities, affecting the replacement rate among teaching, research, administration and services staff”. “I am certain that in five years the ULPGC will comply with the requirements”. In this respect, the rector expressed his team’s desire to reverse some of the indicators which they identified as important, “such as the temporary nature of the workforce, which requires job stability in order to generate research”. He told the Social Council plenary that “the ULPGC should signal society’s shift towards a knowledge-driven economy which subsequently requires productive university workforces”. He concluded by saying, “I know that these are objectives which we will be able to achieve”.

The ULPGC Social Council secretary, Miguel Ángel Acosta, revealed to the members of the plenary that the draft of the new Royal Decree toughens the requirements prescribed since 2015 concerning the creation and recognition of universities in Spain. In this respect, he indicated that the Conferencia de los Consejos Sociales de las Universidades Españolas [Conference of Social Councils of Spanish Universities] sees it as positive that this Royal Decree “clarifies what may be regarded as a university and establishes quality criteria concerning teaching and research activity, and concerning the personnel and features of the teaching staff”. However, the Conference also highlighted that “this Royal Decree has areas for improvement, such as where it does not take into account the possibility of polytechnic or specialised universities, transparency procedures and internal management control, and the requirement for universities to have research plans accounting for 5% of their budget when the funding of public universities is currently predetermined by regional governments”.

Miguel Ángel Acosta also referred to the ULPGC’s current indicators. Taking into account the new Royal Decree and the report produced by the Observatorio Universitario [University Observatory], “the ULPGC currently meets 100% of the requirements concerning teaching provision as well as in the field of research as it completes the projects it is awarded in a five year period”. However, there are some indicators which show the ULPGC must improve. These concern the number of publications produced by its researchers and the sexenios de investigación [awarded on the basis of research work conducted over a six-year period] these researchers hold. With regard to the teaching and research staff, the Social Council secretary reported that the ULPGC complies with the requirements of the new Royal Decree, “except in the case of temporary staff, which is 40% higher than that stipulated, although analysis will be needed to see if the data used by the Observatorio Universitario include teaching staff in the field of health sciences” as these staff have a different employment status.

The new vice-rector for research and knowledge transfer, Marisol Izquierdo, and the new vice-rector for teaching, academic planning and educational innovation, Cecilia Dorado, attended the extraordinary plenary of the Social Council, presenting a preliminary general report on the ULPGC teaching and research staff. In this report they highlighted that “in the majority of university departments, the teaching and research staff have an average age of over 50 and this affects planning for future replacements”. Similarly, they noted that the highest-ranking lecturers, both professors and associate professors [titulares de Universidad], are those who are oldest, in contrast to part time teaching staff, whose numbers grew during the economic crisis. The result of this has been that, since 2012, the number of full-time teaching staff has fallen by 200, in favour of part time staff. As the vice-rectors emphasised, the new rectoral team believes it is necessary “to increase the number of lecturers with a doctorate [profesores contratados doctor] and assistant lecturers with a doctorate [profesores ayudantes doctor], who are those qualified to replace retiring lecturers. This is because only 10% of ULPGC staff are lecturers with a doctorate and 2.7% are assistant lecturers with a doctorate”. “Our aim is to recruit young lecturers who will, in the future, be able to become professors or associate professors”.

The vice-rector, Marisol Izquierdo, concluded by looking the field of research and reporting to the Social Council that the ULPGC publishes approximately 850 articles per year, “which equates to 0.53 per lecturer per year and to meet the requirements of the new Royal Decree there will need to be 1100 articles per year”. Furthermore, she emphasised that research carried out within the field of humanities and social sciences are not evaluated in the same way as that in other fields and that this has been a handicap for the ULPGC, as it conducts and leads a large number of research projects in these areas.

Following the presentations of both vice-rectors, the Social Council plenary gave its full support and cooperation in order that, over these coming years, the ULPGC can meet the objectives concerning teaching and research prescribed within the draft Royal Decree, with the aim of complying with the requirements established on a national level.