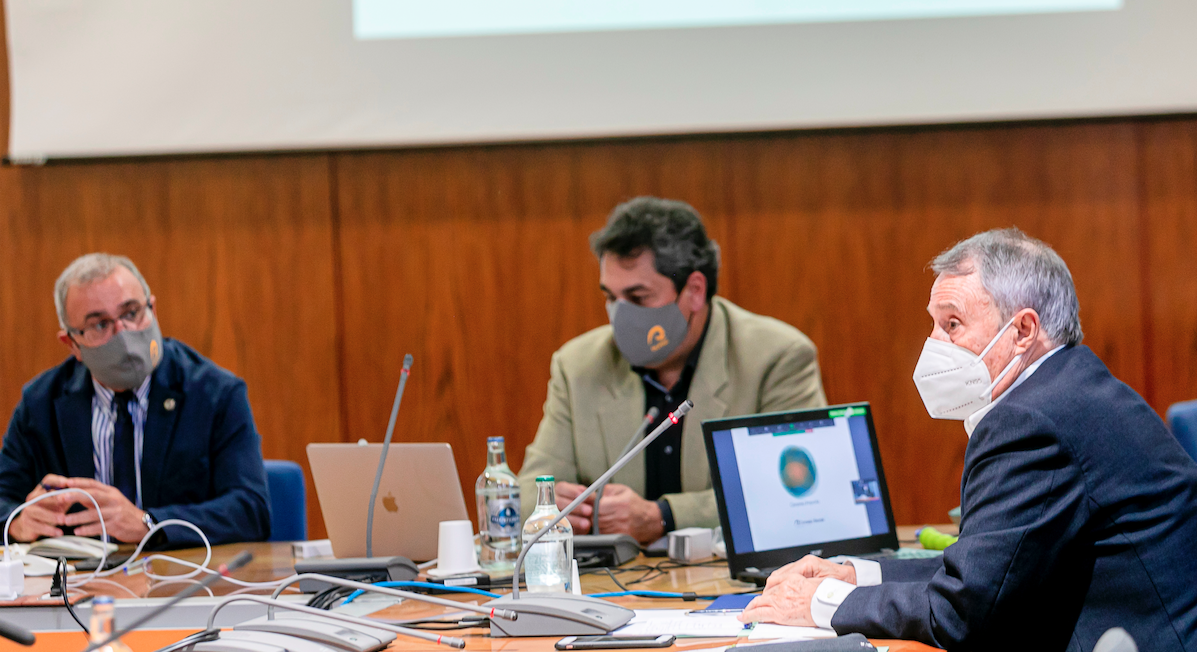 The proposal is for a transformative and structural model which is capable of bringing about the diversification the Canary Islands need and which lays the foundations for understanding what the future of the Canary Islands should be.

The proposal which serves as a pilot project, based on an updated and smart tourism, has the support of the Chamber of Commerce.

Jesús León calls on civil society to participate more in decision making, “so as not to remain stuck in the last century”.

The Gran Canaria Chamber of Commerce plenary has congratulated the ULPGC Social Council for the contributions of the Canarias Importa [The Canary Islands are Important] initiative. This took place during a remote meeting attended by the chairman and the secretary of the Social Council, Jesús León Lima and Miguel Ángel Acosta, who were accompanied by Francisco Rubio Royo, honorary rector of the ULPGC and the coordinator of the initiative, which 10 experts and more than 50 contributors have participated in with the aim of proposing measures for the design of a new model for transformative development which is capable of diversifying the Canary Island economy within the new outlook for the future brought about by the Covid19 healthcare crisis.

Present on behalf of the Gran Canaria Chamber of Commerce, in addition to other members of the plenary, were: Santiago Armas, chairman of the Tourism Committee; Pilar Alcaide, director general, Luis Padrón, general secretary; and Anabel Medina, head of the Tourism Department.

Santiago Armas, chairman of the Tourism Committee, praised the contributions of the initiative and emphasised that the Social Council has become one of their collaborators through the European Funds Group which the Chamber created to coordinate the selection of the projects which businesses will submit to the Next Generation programme application process.

The chairman of the Social Council, Jesús León Lima, thanked the Chamber of Commerce for its cooperation and its involvement in making the Canarias Importa proposals known to its members. He then explained that the Social Council could not stand on the sidelines during the crisis created by the pandemic and that it had to get involved to express its views and to place the academic knowledge of the university at the service of society. “The result has been a long-term guidance document based on the synergy between three ecosystems: blue, green, and orange, in order to combine social, economic and environmental systems and lay the foundations for an understanding of where the Canary Islands should be moving towards and what its future should be. This it does through proposing a transformative and structural model which is capable of bringing about the diversification the Canary Islands need and which we have so often heard talk of”.

Referring to the current moment and the arrival of European Funds, León Lima said that this is an opportunity which the Canary Islands cannot miss. “It depends on us whether we are a driving force or whether we are bringing up the rear. Our future cannot be a continuation of the past, the future is already here and it is not invented but built – nobody is going to hand it to us on a plate”. Jesús León concluded his remarks by calling on civil society, of which the Chamber of Commerce is a representative, to “increasingly take a lead in decision making because, if not, we will remain stuck in the last century”.

For his part, Francisco Rubio Royo summarised the main areas and contributions of the Canarias Importa initiative, focusing on the pilot project which is based on a smart and updated tourism as a force to drive and diversify the economy. He also focused on the use of European Funds, which should be aimed at projects which bring about structural rather than temporary change.

He also underlined that the actions proposed by the Canarias Importa initiative are short, medium and long term and are geared towards promoting an influential project and to immediately take action and begin to head towards the future, bring about change through updating tourism, promote action concerning human ecosystems in R+D+i, and inform and communicate with the public.

In this regard, he explained the scope of the Senior Resort School & Lab project, which will serve to influence other sectors. The project proposes the creation of a long-stay micro destination for seniors which acts as a laboratory school and is a global benchmark. Linked to the project will be the creation of the biggest international network of schools, universities and businesses and the deployment of intelligence systems for corporate R+D+i. “This is about making everything we do exportable to other parts of the world, because the Canary Islands could be a benchmark for this shift to smart and updated tourism”. A laboratory will also be created within the framework of this project in order to spearhead the future of travel. This requires technology with applications in neuroscience and robotics.

Canarias Importa has budgeted 90 million euros for this pilot project. Before now, this initiative has been presented to: the Canary Island government and parliament, the Lanzarote and Gran Canaria Chambers of Commerce, the professional associations, the Confederación Canaria de Empresarios [Canary Island Confederation of Entrepreneurs], the Economic Society of Tenerife, and the Economic Society of Gran Canaria. The latter of these has become a member of the Canarias Importa working group in the area of air connectivity, after suggesting its inclusion within the initiative.

The pilot project, which meets the criteria to apply for Next Generation funding, has attracted the interest of the municipalities of San Bartolomé de Tirajana and Mogán, along with that of numerous companies and science and technology centres.