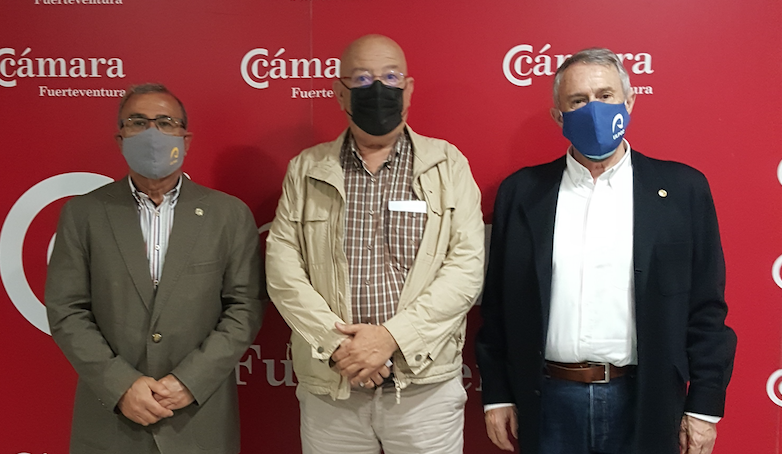 The chairman of the ULPGC Social Council, Jesus León Lima, presented the proposals of the Canarias Importa [The Canary Islands are Important] initiative to the Fuerteventura Chamber of Commerce during a meeting with Antonio Hormiga Alonso, vice chairman of the Chamber of Commerce, along with other members of the Chamber including María Dolores Rodríguez Mejías, third vice chairman, and Miguel Ángel Rodríguez Pérez, chairman of the Tourism Committee. Francisco Rubio Royo, honorary rector of the ULPGC and the coordinator of the initiative, also spoke during this meeting, focusing his remarks on the proposals relating to the tourism sector which have been created by 10 experts and more than 60 contributors.

The chairman of the Social Council, Jesús León Lima, thanked the Chamber of Commerce for the interest it has shown in finding out about the Canarias Importa proposals. He then explained that the Social Council could not stand on the sidelines during the crisis created by the pandemic and that it had to get involved in order to express its views and to place the academic knowledge of the university at the service of society. “The result has been a long-term guidance document based on the synergy between three ecosystems: blue, green, and orange, in order to combine social, economic and environmental systems and lay the foundations for an understanding of where the Canary Islands should be moving towards and what its future should be. This it does through proposing a transformative and structural model which is capable of bringing about the diversification the Canary Islands need and which we have so often heard talk of”.

For his part, Francisco Rubio Royo summarised the main areas and contributions of the Canarias Importa initiative, focusing on the pilot project which is based on a smart and updated tourism as a force to drive and diversify the economy. He also focused on the use of European Funds, which should be aimed at projects which bring about structural rather than temporary change.

He also highlighted that the actions proposed by the Canarias Importa initiative are short, medium and long term and are geared towards promoting an influential project, based on tourism, in order to immediately take action and to: begin to head towards the future, bring about change through updating tourism, promote action concerning human ecosystems in R+D+i, and educate and communicate with the public.

He emphasised the scope of the Senior Resort School & Lab project, which will serve to influence other sectors. The project proposes the creation of a long-stay micro destination for seniors which acts as a laboratory school and is a global benchmark. Linked to the project will be the creation of the biggest international network of schools, universities and businesses and the deployment of intelligence systems for corporate R+D+i. “This is about making everything we do exportable to other parts of the world, because the Canary Islands could be a benchmark for this shift to smart and updated tourism”. A laboratory will also be created within the framework of this project in order to spearhead the future of travel. This requires technology with applications in neuroscience and robotics.