‘Alumni ULPGC’ is presented as a point of contact between graduates, former students and society 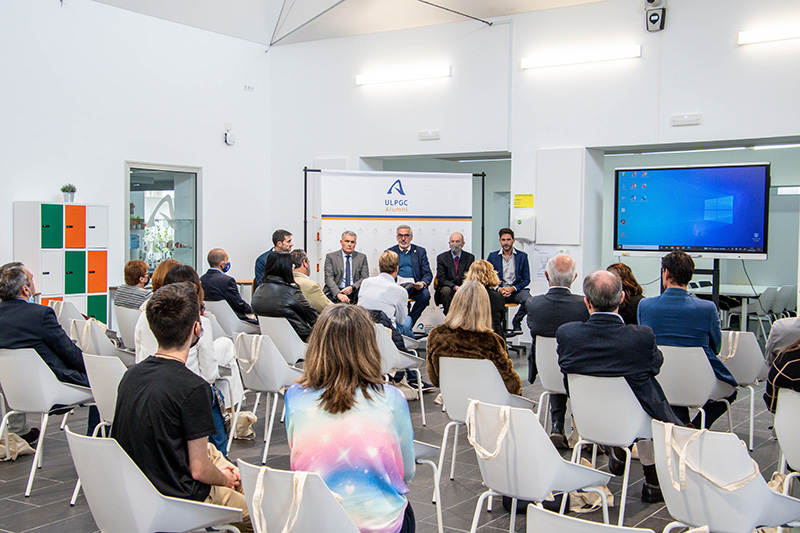 The Alumni Association [Asociación Alumni] officially got underway after its introduction in an event chaired by the ULPGC rector, Lluís Serra, which was also attended by the Canary Island government’s director general of universities, Manuel Ramírez Sánchez; the chairman of the ULPGC Social Council, Ángel Tristán Pimienta; the Social Council secretary, Miguel Ángel Acosta; the vice-rector for students, alumni and employability, David Sánchez; and the vice-rector for communication and community outreach, Suny Beerli. This is in addition to other Alumni Association post holders and representatives of the Student Council, professional bodies, and the Fundación Universitaria Las Palmas, among others. The launch took place in the Tafira campus’ Nexo building, where the Association’s headquarters will be located.

The rector highlighted that the Alumni Association “symbolises connection, responsibility, and cooperation; connection because our University’s friends and graduates remain united within this association, responsibility because the alumni must be a model for our students, an image of what they can come to achieve, and cooperation because launching the Association has required a coordinated effort from the rector’s office, the Social Council, and the Association”.

The chairman of the Social Council, Ángel Tristán Pimienta, who is also on Alumni España’s advisory council, recalled how in 2017 he took part in a national alumni meeting, held in the University of La Laguna and speaking there pledged to create a ULPGC alumni association in only six months “and that’s what happened”. By the same token, in reference to former students, he stated that the experience that the worlds of work and business can share is incredibly important. “Once they have left university they realise that the world is very tough, that they will have to fend for themselves and that they will have to keep learning”. In this way, he highlighted how the members of the Alumni Association will, based on their experience, be able to talk to students about “embarking on their path through determination and sacrifice and using their influence within the business sector to obtain additional funding for the University”.

Sixto Martín, chairman of the Alumni Association, thanked the rectorate team, Social Council, and the association’s governing board for their effort to launch this initiative, after a few years during which the Alumni Association has not been immune to the obstacles caused by the extraordinary situations we have experienced. Moreover, he emphasised that “we are an association which is open to Canary Island society, which aims to be an active channel between the ULPGC, graduates, friends of the University, businesses, professional bodies, and other organisations”.

During the event, the Alumni Association appointed its first ‘ambassadors’, notable ULPGC graduates who can be an example and an inspiration to the university community: the physicist and scientific communicator, Javier Santaolalla, who attended the event, and the chair of the Asociación Heroikka de Mujeres Emprendadoras, Maica Gil, who participated via video link from San Francisco (United States).

Concluding the event was the Canary Island government’s director general of universities, Manuel Ramírez, who congratulated the Association on its drive and initiative and reminded of its connection to the founding of the ULPGC, which was created due to the effort of a whole grassroots movement.

The ULPGC Alumni Association is a private non-profit entity which unites graduates, former students, and friends of the University with the intention of serving as an channel between them, strengthening their relationships through promoting different activities. Its aim is to stimulate ongoing contact between the University and its former students, and to also obtain a rich and diverse network of contacts for them. Moreover, it offers a constant stream of information and privileged access to the lifelong learning provided by the ULPGC and adapted to the changes which emerge in current understanding and professional activities.