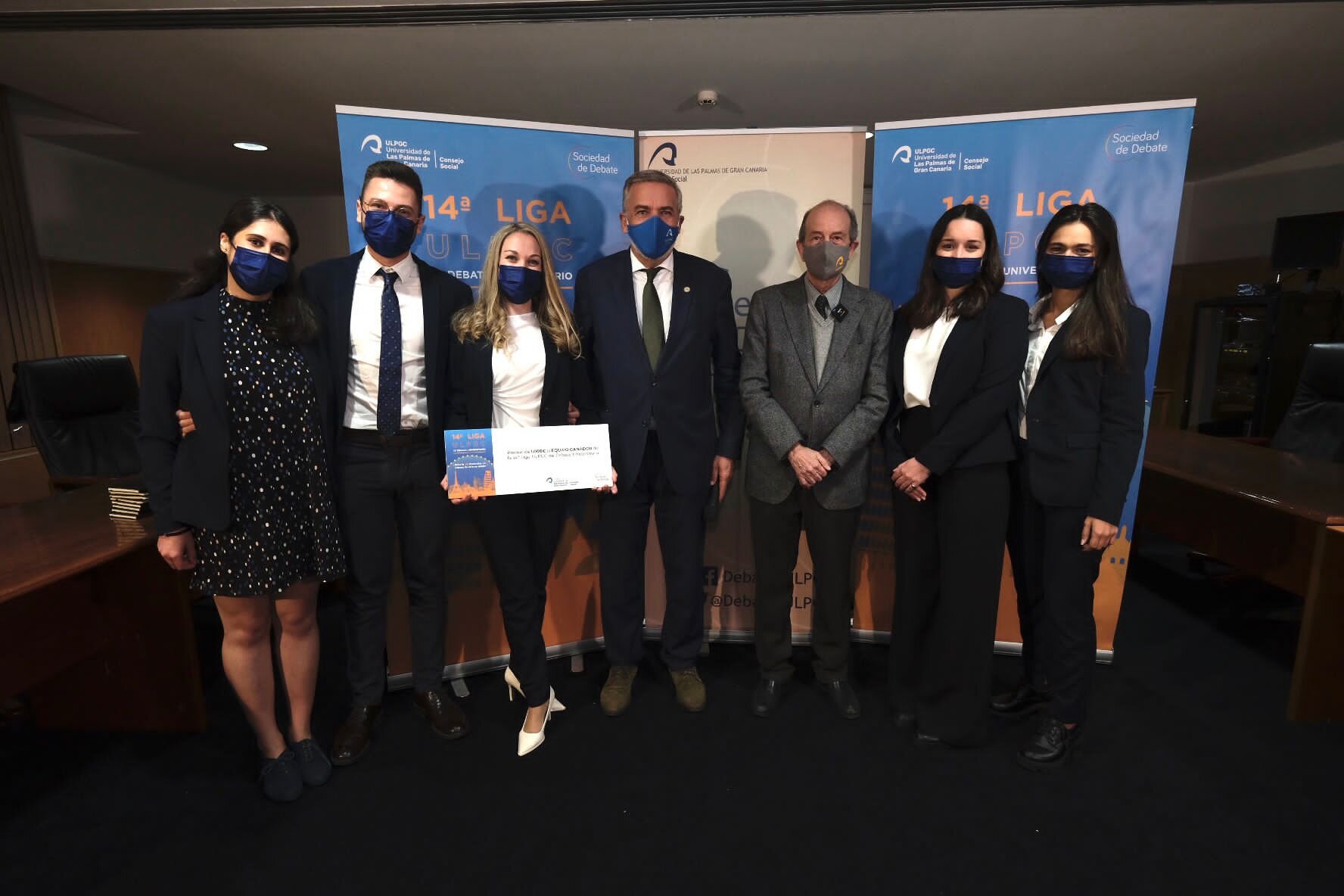 Team ‘Damocles’, made up of ULPGC law degree students, was crowned the winner of the 14th ULPGC Debate League, organised by the ULPGC Social Council in cooperation with the Vice-rectorate for Students, Alumni and Employability.

‘Damocles’ earned victory after facing ‘Odisea’ in a close final held in the Economics, Business, and Tourism Faculty’s auditorium (Tafira Campus). In addition, the judging panel decided that the Best Speaker prize would go to Ismael Hernández (‘Damocles’) and gave a special mention to the speakers Carla Coba (‘Odisea’) and Raquel Pérez (‘Gaia’).

For 34 minutes each team had to debate this edition’s question, which responds to the situation created by Russia’s invasion of Ukraine: “Should the European Union develop its own defence system?”, with one in favour and the other against.

Making up team ‘Damocles’ were Ana Doreste, Ismael Hernández, Lucía Tejera (captain), Ainhoa Dávila, and Anabel Ojeda. The winners received a financial prize of €1,000 and will represent the ULPGC in the National University Debate League to be held this year. The second-place team, which received a prize of €500, consisted of Carla Coba  (cpatain), Ysleduy Mundaray, Joel Godoy, and Youness El Mousaoui. The Best Speaker, Ismael Hernández, recieved a 150 euro prize.

‘Damocles’ earned victory, at the discretion of the judges, after three intense days of encounters between the ten participating teams, 9 of which were formed by ULPGC students with one guest team of students from the Universidad Fernando Pessoa de Canarias.

Attending the awards ceremony were the rector of the ULPGC, Lluís Serra Majem, along with Angel Tristán Pimienta, the chairman of the ULPGC Social Council who congratulated all the participants and confirmed the support of the academic institution which heads up the organisation of new editions of this debate league. The main aim of the league is to encourage dialogue and public debate among university students, grounded in teamwork for the research and analysis of the topic for debate. “These debates promote among students the art of  speaking, dialectic, and debating skills, along with critical thinking. These have become the cornerstones of university education,” stated Tristán Pimienta.