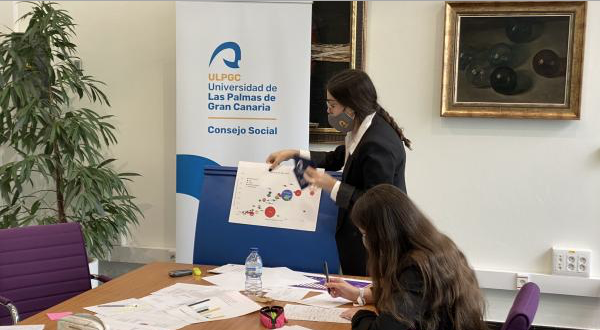 The ULPGC Students – Ada Santana, from the undergraduate law degree, and Raquel Pérez, from the joint business administration and management and law degree – won their debate against students from CUNEF [the University Centre for Financial Studies] with a score of 74.67 points to 70. This was the fourth highest score of the ten debates which took place.

The first round of the Spanish University Debate League (LEDU) Talents Round was held on Saturday 27th February. The Talents Round will be held remotely in a round-robin format until May with the following debate topic: “Does Europe have what is required to lead in the digital sphere ahead of other powers?”

A total of 60 teams from 26 Spanish universities will take part in the LEDU Talents Round, with the best four teams directly qualifying for the LEDU Final Round, which is expected to be held in person.

The Social Council is supporting the two students – who have qualified for the second round of debates – in this league, as the Social Council is the driving force behind this educational initiative within the ULPGC, with the aim of promoting the art of speaking, reasoning and debating among students, along with critical thinking. These have all become cornerstones of a university academic education.