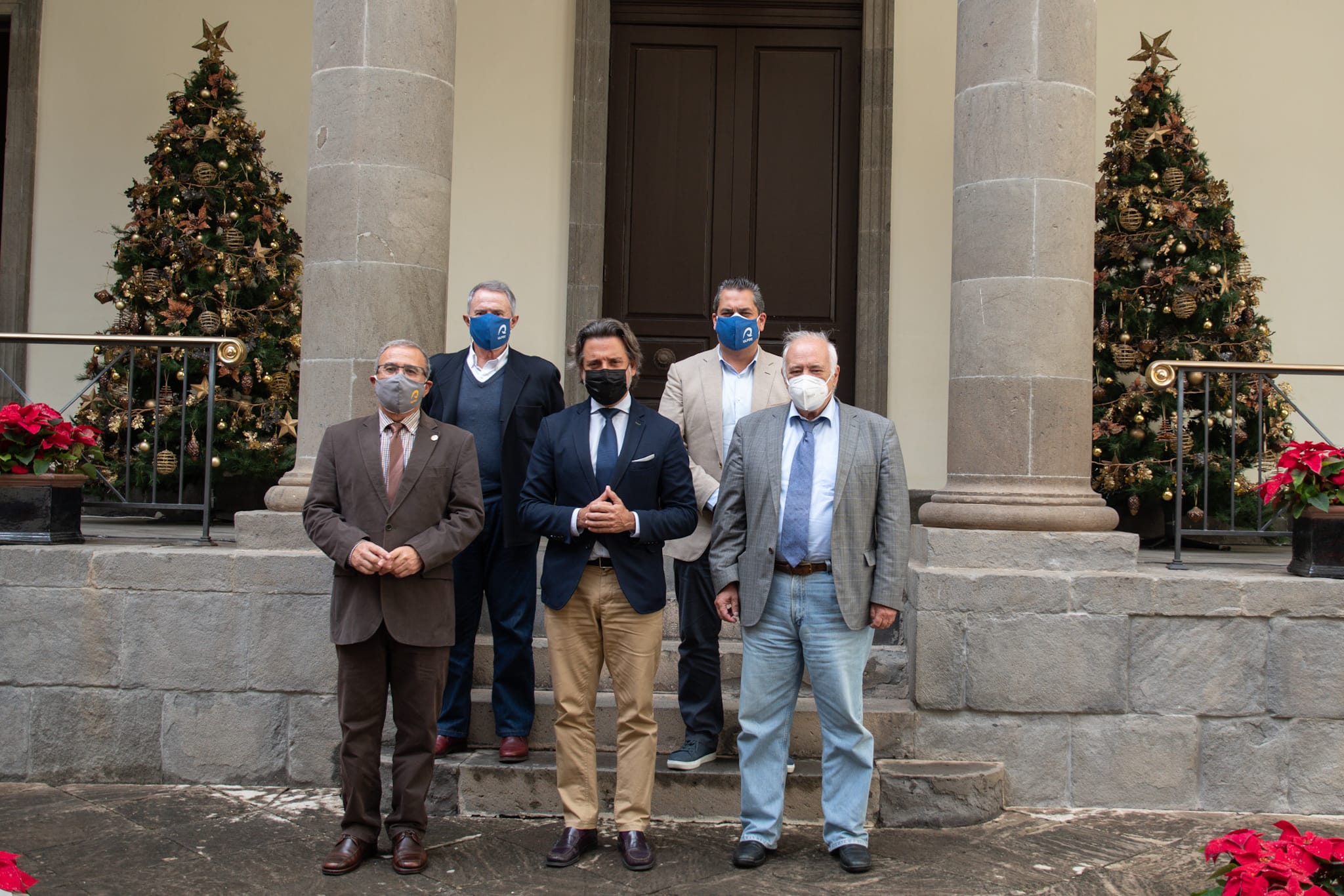 The aim of the initiative is to enable the Canary Islands to be connected to prosperity and an economy with greater added value and increased diversity and sustainability.

Ten experts and over 50 contributors have worked on the document.

This Tuesday [15th December] the president of the Canary Islands Parliament, Gustavo Matos, learnt of the proposals put forward by the Canarias Importa [The Canary Islands are Important] initiative. This has been advocated by the University of Las Palmas de Gran Canaria’s Social Council and produced by ten experts and more than 50 contributors with the aim of proposing measures for the design of a new development model for the Canary Islands within the new outlook for the future brought about by the Covid19 healthcare crisis. The document was presented by the Social Council’s chairman, Jesús León Lima, and secretary, Miguel Ángel Acosta Rodríguez. They were accompanied by Emilio Mayoral Fernández, a member of the ULPGC Social Council, and Francisco Rubio Royo, honorary rector of the ULPGC and coordinator of the initiative, who explained the objective and findings of the document which experts have been working on since June of this year.

Gustavo Matos congratulated and thanked the ULPGC Social Council for having led this initiative, “which all MPs and parliamentary groups should be familiar with in order for it to become a permanent roadmap for the contribution of ideas concerning the immediate future that we must face”.

The chairman of the Social Council, Jesús León Lima, explained to the president of the Parliament that this proposal allows our islands to be connected to prosperity and an economy with greater added value and increased diversity and sustainability. León acknowledged that it will not be easy to complete the proposed process “as it requires genuine change to our ways of thinking and acting in order to place value on ur skills and resources”. However, he added that beginning the process “is within our reach and we should do so without delay as time is passing at an alarming rate”.

The chairman of the Social Council highlighted the “extensive” work of the Canarias Importa facilitators, their enthusiasm and their altruism, which in his opinion are evidence of a strong commitment to our islands.

For his part, Francisco Rubio Royo – who has coordinated and steered both the team of experts and the ‘nerve centre’ hich has made this possible –explained to Gustavo Matos that the team of facilitators, which is made up evenly of those from inside and outside the university, decided to do something which is unique and different from the many existing initiatives which, in his opinion, marks a turning point that could speed up the paradigm shift that is needed in the Canary Islands: to be more digital, sustainable and diverse, with less dependence on tourism. “We have not focused so much on the question of what to do, but rather on the question of how. We contribute ideas as well as a proposed model to enable the change the Canary Islands need to be initiated. This does not focus on wanting an isolated change now, but rather on wanting continual change and to make improvements together”.

During his remarks, Rubio Royo emphasised that any undertakings must be in line with the Sustainable Development Goals 2030 agenda, on a European level with the European Green Deal, and Digital Europe 2025, and on a regional level with the Reactiva Canarias plan.

Canarias Importa has been created as a process of diverse and sustainable development for the Canary Islands which is transformative, open, dynamic, flexible, ongoing and resilient. It is based on 10 strategic elements, grouped into three categories: core elements, strengthening elements, and driving elements. He concluded by saying that the results they hope for are: to create a more diverse production system, to drive emerging sectors, and to advance existing sectors with potential.

The programmes and undertakings selected for Canarias Importa fulfil five criteria: to prioritise those with the greatest potential for expansion; to seek a balance between diversifying the production system, driving emerging sectors, and developing existing sectors with potential and the capacity to improve; to select those which could theoretically have a balanced economic, social, and environmental impact; to seek a balance between the three categories of components within Canarias Importa; and to facilitate a dynamic and stable balance between the three possible scenarios for the Canary Islands: short term (2020), medium term (2025), and long term (2030 and beyond). Canarias Importa is situated within the second and third of these scenarios, with its short term in 2023, for which reason it is necessary to bridge the gap between 2020 and 2023, particularly with regards to the first step to be taken concerning smart tourism.

The ULPGC Social Council intends to present the Canarias Importa initiative to social stakeholders, the general public, and the leading public institutions of the Canary Islands.

THE TEAM OF FACILITATORS: Miguel Ángel Acosta Rodriguez, secretary of the Social Council, industrial engineer and doctor of economic and business sciences; Javier Arístegui Ruiz, professor of ecology at the ULPGC; José Manuel Baltar Trabazo, former regional minister of health for the Canary Island government and healthcare management specialist; Patricia Barber Pérez, tenured lecturer at the ULPGC and senior researcher for the Health and Public Policy Economics Research Group; Jimena Delgado Tramona-Hernández, former manager of SPEGC [the Organisation for the Economic Promotion of Gran Canaria] and former chairman of the ZEC [Canary Islands’ Special Zone], expert in public administration, and innovation and internationalisation management; Natascha García Dávila, manager of ADEPSI;  José Juan González Salmah, managing director of CANARAGUA; Manual Lobo Cabrera, former rector of the ULPGC and professor of modern history at the ULPGC, Rafael Pérez Jiménez, professor of signal theory and communications at the ULPGC, head of the IDeTIC [Institute for Technological Development and Innovation in Communications] university institute; Ana Suárez Calvo, executive director of the Germán Suárez Investments Group and vice chairman of the ULPGC Social Council; Lourdes Trujillo Castellano, professor in Economics at the ULPGC, head of the ULPGC port-maritime organisation [Cátedra Marítimo-Portuaria], and Edu William, entrepreneur, Corporate Venture Builder and associate lecturer with a doctorate at the ULPGC.

THE VITAL NERVE CENTRE: Evelyn Alonso Rohner, chair of the Sergio Alonso Foundation and architect with a doctorate from the ULPGC; Mario Hernández Tejera, professor of computer sciences and artificial intelligence at the ULPGC and SIANI [University Institute of Intelligent Systems and Numeric Applications in Engineering] (quality, efficiency and sustainability) research institute; Francisco José Vázquez Polo, professor of quantitative methods for business and the economy at the ULPGC and the TIDES [The University Institute of Tourism and Sustainable Economic Development] research institute; Eduardo Wiliam, and Franciso Rubio Royo.