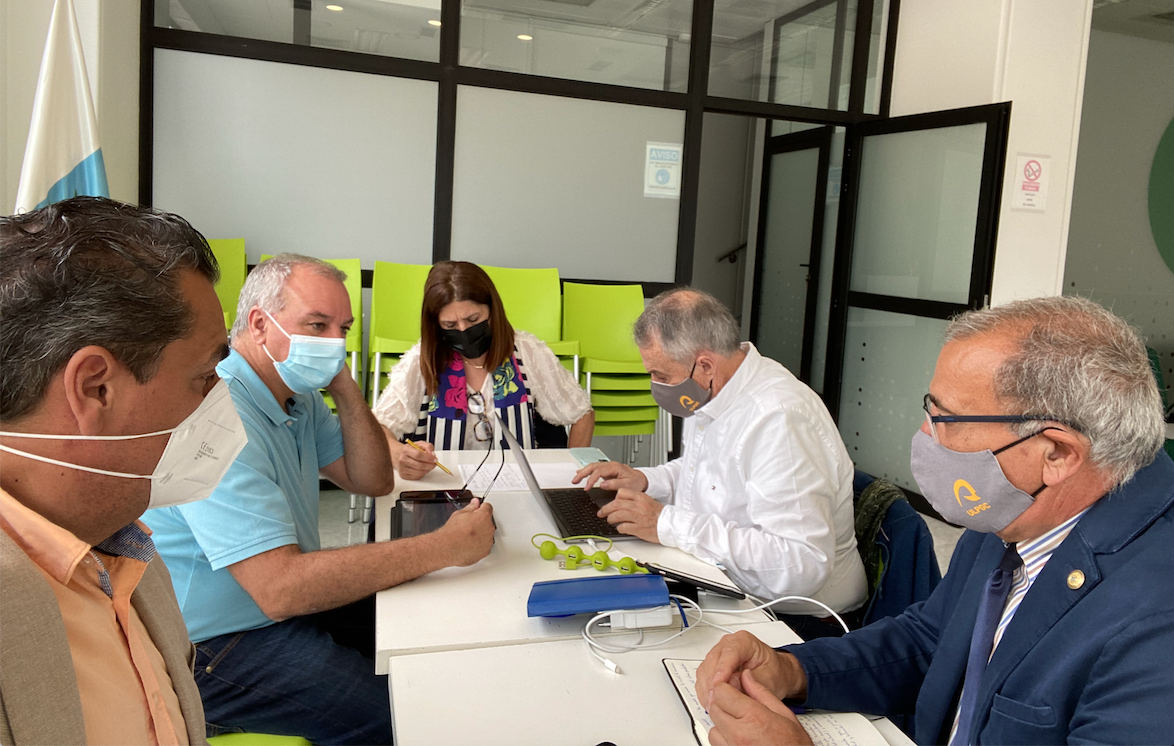 The regional MPs Carmen Hernández and Luis Campos stressed that Canarias Importa [The Canary Islands are Important] is in line with the new social and economic model proposed by the Canary Island Parliament and government.

The representatives of the political parties Coalición Canaria, Partido Popular, PSOE, Ciudadanos, Podemos, and Nueva Canarias agree with the view of this initiative, that in order to achieve the transformation of the Canary Island’s production system it is necessary to undergo a change in mentality and for all social, economic and political stakeholders to be involved.

The Nueva Canarias regional MPs, Carmen Hernández and Luis Campos, met with Jesús León Lima and Miguel Ángel Acosta, the chairman and the secretary of the ULPGC Social Council respectively, along with the coordinator of the initiative, Francisco Rubio Royo, in order to find out first-hand about the proposals of the initiative that has been promoted by the Social Council. This meeting concluded those held during the past two months with representatives from across the political spectrum of the Canary Island Parliament: Coalición Canaria, Partido Popular, PSOE, Ciudadanos, and Podemos.

Luis Campos and Carmen Hernández congratulated the Social Council and stressed that Canarias Importa is in line with the new social and economic model proposed by the Canary Island Parliament and government.

The regional MPs agree that tourism, as proposed by Canarias Importa, should act to diversify itself by driving emerging sectors and the changes required in existing sectors. “As you suggest, the benefits of tourism should be transferable to the rest of the country and tourism should be the driving force behind the primary and industrial sectors”.

For both regional MPs Canarias Importa is lacking what they believe to be a key issue, which is very closely linked to sustainability and to the new economic, social, environmental and territorial model being proposed: the demographic model. In their opinion, this is one of the pending issues which should be worked on without delay.

Carmen Hernández expressed her concern regarding the future being created and the need for it to be designed “by us, here, so that others do not plan it”.

The Nueva Canarias regional MP indicated that agreement between social, economic and political stakeholders poses a big challenge to changing to the economic and social model of the Canary Islands, so that Canary Island society can share the same project, “that trade unions, public authorities, the business community, universities and their social councils, and the media share this process. This is not an easy task but I believe it would be the basis for change in our governing culture and in changing our view on management, which is so segmented”.

She also believes it is crucial that public sector employees be involved and that the authorities be modernised – to put an end to the straight-jacketing, rigidity, and bureaucracy – and expressed her concern about the management of European funding which the Canary Islands will receive and which requires changes to all public authorities, changes she believes will be crucial during the current crisis.

Both regional MPs believe Canarias Importa is correct in putting its faith in the silver economy as an emerging sector which creates jobs. “By the end of the decade there will be half a million people over the age of 65 and we do not have the social or health resources required to solve this problem which needs an answer”. She also mentioned the need to fix the existing problem of solid waste, landfill and everything related to water treatment, “because if we tackle the environmental challenges we face we will also generate economy and employment”. In addition, she mentioned the sea related industry as a creator of employment, although she believes “we always face the same obstacles, our public authorities have become obsolete and this needs to change”.

Both the chairman of the Social Council, Jesús León, and Francisco Rubio Royo offered to collaborate and to include the proposals of both regional MPs into Canarias Importa. Responding to the need for agreement between different stakeholders in order to implement the new economic development model, as advocated by Carmen Hernández, the chairman highlighted the role that the Social Council can play as society’s representative in the University and signalled that Canarias Importa is also a call for civil society to increasingly take a lead in decision making and to take ownership of the model for change it proposes.

The representatives of all the parliamentary groups who attended the presentations of Canarias Importa congratulated the Social Council and praised the initiative’s long-term, medium-term and, in particular, short-term proposals regarding an updated and smart tourism that must act as a driving force for other economic activities. The representatives of the parliamentary groups said they agreed with Canarias Importa that in order to achieve the transformation of the Canary Island’s production system, a change in mentality and the involvement of all social, economic and political stakeholders is required. Similarly, they highlighted the role that the universities should play, as a source of knowledge and as a link to society, when bringing about these changes.

In addition to meeting with the political groups of the Canary Island Parliament, the Social Council has also met with the leaders of public institutions, trade unions, business associations, professional bodies, and civic associations in order to communicate the Canarias Importa proposals to them.