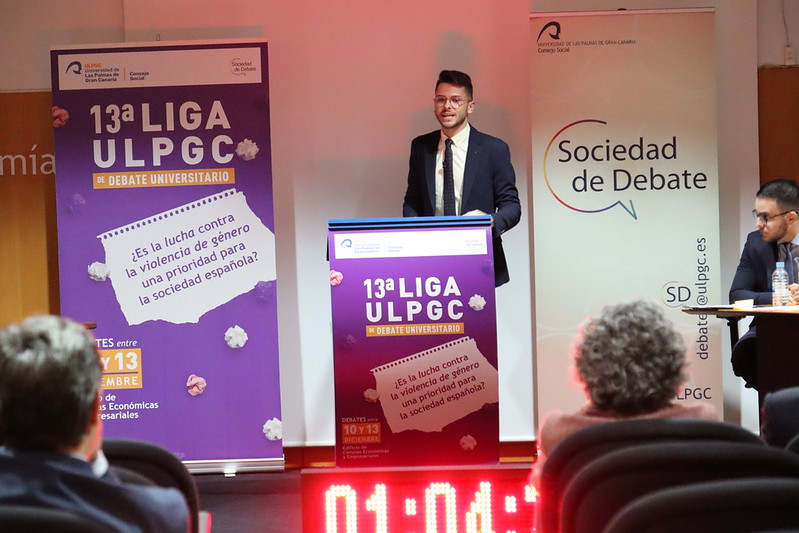 Registration is already open for teams for the 14th edition, due to take place from 14th to 16thDecember in the Economics and Business Studies building.

The ULPGC Debate Society and the ULPGC Social Council, in collaboration with the Vice-rectorate for Students, Alumni and Employability, have opened registration for the university’s students who wish to take part in the 14th ULPGC University Debate League due to take place from 14th to 16th December in the Economics and Business Studies building on the Tafira Campus.

In so doing, the Social Council restarts one of the ULPGC’s most popular educational initiatives, following its compulsory cancellation last academic year due to the pandemic. The objective of this initiative is toencourage dialogue and public debate among university students, with the aim of promoting the development of speaking, dialectic, and debating skills, along with critical thinking. These skills have become the cornerstones and overarching themes of the academic education received by students. During this new edition, registration for which will be open until the 7th December 2021, participating teams will debate and argue dialectically on a new topical issue: “Should the European Union recognise Moroccan sovereignty over Western Sahara?”. Within this subject area the ULPGC Debate League seeks to tackle, from a European perspective, a complex topical issue which is particularly relevant for Spain and specifically for the Canary Islands. In this regard, the debate will revolve around matters such as stability in the southern region of Mauritania, political decisions made by Morocco with those countries which recognise its sovereignty over Western Sahara, the measures adopted by Algeria surrounding the supply of gas through the gas pipeline passing through the country, the dispute over the surrounding waters, and the recent European Court of Justice ruling regarding certain agriculture and fishing agreements with Morocco.

Teams should be registered through the ULPGC Social Council website, where there is a form to be completed by all team members. The competition rules which will govern this league are also published on the same web page:

The ULPGC is the Spanish public university which has held the largest number of Debate Leagues, the philosophy and organisation of which are based on the models employed in the world’s best universities and which respond to the need within academia to improve teamwork skills, along with personal skills regarding research, oral expression, and timely response. As society’s participation body within the university, the Social Council is particularly interested in continuing to promote this initiative which allows students to make progress in acquiring transferable skills such as critical thinking, public debate and comparison of ideas in addition to searching for arguments which support them. Universities should nurture and strengthen these skills which, in an ever more competitive world, are increasingly required by employers. In this way the ULPGC University Debate League contributes to students’ successfully entering the workplace and offers them the possibility of developing key skills within their training, as advocated by the European Higher Education Area.