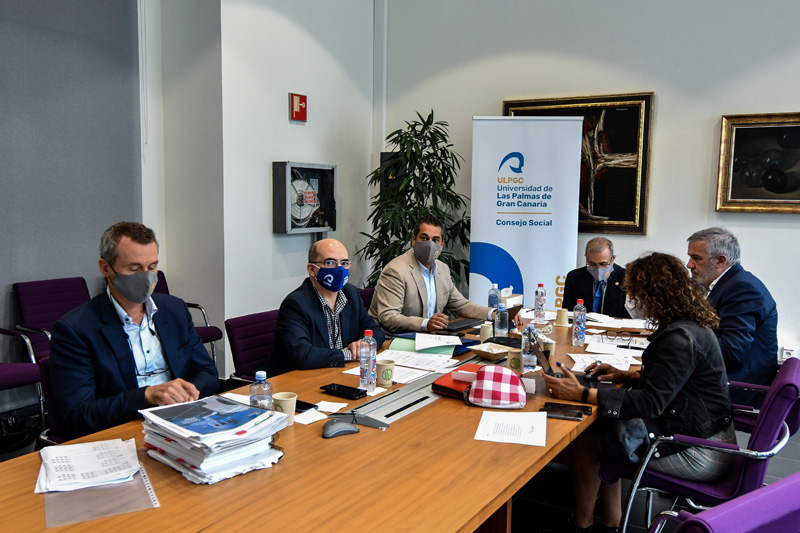 The accounts include a positive balance [remanente de tesorería] totaling 45.21 million euros, of which 30.95 is freely available. In European System of Accounts terms, the ULPGC closed its 2020 accounts with a financing capacity of 10.34 million euros.

The settlement of the Social Council’s own 2020 budget was also approved. This budget was implemented almost in its entirety during a period which was adversely affected by the alerts issued in Spain regarding health and the economy.

During an extraordinary meeting held today, the Social Council plenary approved the ULPGC 2020 Annual Accounts which show a non-financial budget result of 7.22 million euros and an adjusted budget (surplus) of 4.81 million euros.

As explained by the director of the university, Roberto Moreno, this is “the first financial year closed in line with the new Canary Islands’ General Public Accounting Plan [Plan General de Contabilidad Pública], which has been in force since 1st January 2020. Also, it is the first time since 2008 that the consolidated ULPGC Annual Accounts have been submitted alongside those of the ULPGC’s dependent entities: the Fundación Canaria Parque Científico y Tecnológico, the RIC ULPGC company, the TIC ULPGC company, and the Fundación Canaria Lucio de las Casas”.

The settlement of the ULPGC 2020 budget reflects an unusual year, as a result of the pandemic, with an 80% overall degree of implementation. “Of note is the subject of expenditure on current goods and services with a 78.79% degree of implementation, resulting particularly from the reduced consumption of water and electricity which generated savings of more than 370,000 euros. In addition, there was an overall saving on goods and services which amounted to 4.5 million euros”.

Furthermore, the ULPGC 2020 Annual Accounts show increased expenditure on the leasing of information processing equipment due to university activities being moved completely online as a result of the Spanish lockdown. This expenditure amounted to 133,000 euros.

The chairman of the Social Council, Jesús León Lima, congratulated the management team for their work and for the thoroughness and organisation of the information gathered in the annual accounts. He also emphasised the need to update IT processes in order to improve the management and follow-up of the ULPGC’s budgetary control in line with the recommendations which were put forward in a report by the Internal Monitoring Department and which will be followed by the Audit Committee. The chairman welcomed the improvement to the presentation of the accounts in comparison with previous years, which has allowed for their approval in a proper and timely manner.

During the plenary session the ULPGC Social Council also submitted and unanimously approved the settlement of its budget for the 2020 financial year. The general secretary of the Social Council, Miguel Ángel Acosta, reported that the final budget for the Social Council in 2020 amounted to 525,961.52 euros, which was implemented almost in its entirety (96.81%). This highlights the organisation’s management skills, which allowed all funds to be implemented in a year that was adversely affected by the country’s health and economic crisis.

Among the main actions undertaken by the ULPGC Social Council in 2020, the budget settlement highlights the creation of a group of experts from the ULPGC and from social and business spheres. This group produced the ‘Canarias Importa’ [The Canary Islands are Important] initiative with the aim of designing a new development model for the Canary Islands in the wake of the economic and health crisis. Moreover, among the expenditure and initiatives implemented in 2020 the settlement of the Social Council budget demonstrated that several budget items, equating to 70,000 euros of the Social Council’s own resources, had been used to purchase IT equipment. This was in order to reduce the digital divide among ULPGC students so that they could participate in online classes as a consequence of the health alert issued in Spain. On this matter the close partnership between the Social Council and various businesses and private stakeholders was highlighted, as it allowed more funds to be raised in order to buy 70 laptops which were donated to the University Library and the ULPGC Vice-Rectorate for Students.