The Social Council Agrees the Appointment of Roberto Moreno, Doctor in Computer Science, as New Director of the ULPGC 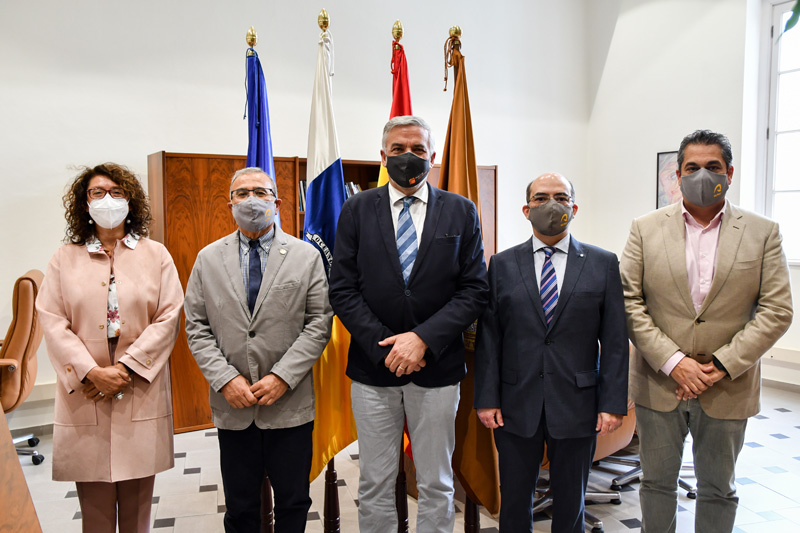 he plenary of the University of Las Palmas de Gran Canaria (ULPGC) Social Council has agreed the appointment of Roberto Moreno as the new director of the ULPGC. As established by the Universities Act [Ley Orgánica de Universidades] his nomination was put forward by the rector, Lluís Serra Majem.

The rector of the ULPGC, Lluís Serra, presented his nomination for the new director, emphasising that “the ULPGC is written in the DNA of Roberto Morena and it was our wish that the new director would be one of our own, someone with great talent and an expert on the University”.

The new director of the ULPGC, Roberto Moreno Díaz, holds a degree in physical sciences from the Universidad Complutense de Madrid and a doctorate in computer science from the University of Las Palmas de Gran Canaria. Since 1996 he has been an associate professor [professor Titular de Universidad] at the ULPGC in the field of computer sciences and artificial intelligence. He has taught computer engineering programmes at undergraduate and master’s level, as well as teaching in the ULPGC’s “Digital Skills Expert” postgraduate qualification [Experto Universitario en Competencias Digitales].

Since 2017 he has taken part in Business Innovation and Mentoring Consultant Training Programmes run by the Canary Island governments’ Agency for Research, Innovation and Information Society [Agencia Canaria de Investigación, Innovación y Sociedad de la Información]. Moreover, from among his work outside of academia it is important to highlight his role as the Island Council of Gran Canaria’s minister for tourism, external trade and technological innovation and his having been the Canary Island regional government’s director general of telecommunications and new technologies (2011-2015) and head of the Canary Island Health Service (2015-2017). Most recently he was the general coordinator for economic and financial affairs [Coordinador General de economía y Hacienda] for the Las Palmas de Gran Canaria City Council.

During his remarks to the plenary Roberto Moreno summarised his key areas of work for the 2021-2025 period under the heading of “Proposals for Open Management”, “showing that one of the key aims for the ULPGC’s new governing team is to open the doors of our offices and listen to the university community”. Among his key aims, Roberto Moreno highlighted his intention to begin as soon as possible a study of the ULPGC administration and services staff workforce, “in order to produce a document stipulating information concerning jobs [relación de puestos de trabajo], which is aligned with the universities of today and with the future forecasted for the ULPGC”. Moreover, he seeks to urge the Canary Island government to initiate a contract-programme in order to define the multi-annual funding of Canary Island universities and to create forums for the coordination of the different services and administrations within the ULPGC.

During the plenary, the new ULPGC rector and new general secretary, Lluís Serra and Inma González, took up their positions as members of the ULPGC Social Council. Alluding to the Social Councils and Organisation of the Canary Island University System Act [Ley sobre Consejos Sociales y Coordinación del Sistema Universitario de Canarias], the chairman of the Social Council, Jesús León, expressed to the rector his interest for the relationship between the Social Council and the ULPGC to be “governed by the principles of collaboration, coordination and loyalty to the university, when carrying out their respective roles”.

Last on the agenda for the Social Council plenary was to authorise the return of the document stipulating information concerning ULPGC administration and services staff jobs which the previous rectoral team had presented to the Social Council in December 2020, after its approval by the ULPGC governing board. The chairman of the Social Council noted that the Social Council “must take into account the change within the ULPGC rectorate as a result of the electoral process which began in January and the commitments made by the new rector concerning human resources including, in the case of the administration and services staff, the need to undertake a study of the workforce and needs of the ULPGC ”. For this reason “and given that it does not seem wise to continue with the approval process” for these positions, the return of the document stipulating information concerning these positions has been approved “with the aim of not influencing the leadership actions of the new rectoral team”, pending a new proposal which has the prior agreement and approval of the ULPGC governing board.