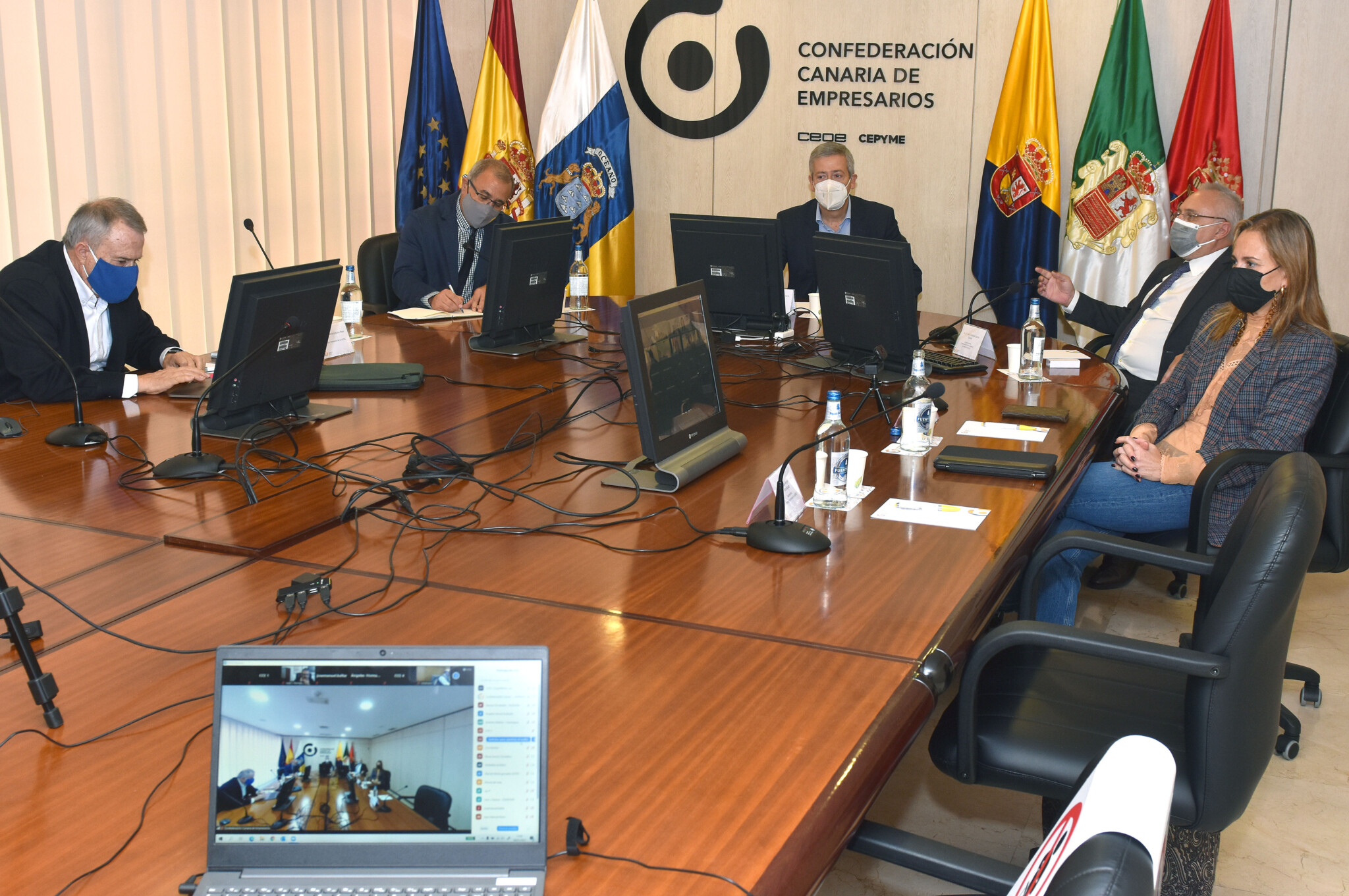 While presenting Canarias Importa [The Canary Islands are Important] to the board of the Confederación Canaria de Empresarios (CCE) [Canary Island Confederation of Entrepreneurs], the chairman of the ULPGC Social Council, Jesús León Lima, stated that the future is not predicted, but rather created and that the initiative is an important tool for achieving this.

León Lima noted the need to establish a technical office with the participation of businesses in order to begin working on the actions required for the Canary Islands to emerge from this crisis, just as he had called for in a meeting held this week with the president of the Canary Island government.

In his remarks to the board León Lima highlighted that the Canary Islands should not place itself only in the hands of large consultancy firms, “we have enough knowledge and talent to be able to decide our future without anyone from outside having to impose it”. In this way, he referred to the ULPGC Social Council’s motive for launching the Canarias Importa initiative which is currently being presented to business and social institutions and entities.

The meeting took place at the CCE headquarters. Present were the chairman and vice chairman of the CCE, Agustín Manrique de Lara and José Cristóbal García, and the chairman and vice chairman of the Social Council, Jesús León Lima and Ana Suárez Calvo, who were accompanied by Francisco Rubio Royo, honorary rector of the ULPGC and coordinator of the initiative. The remaining members of the CCE board joined the meeting via videoconference.

Francisco Rubio Royo summarised the initiative drawn up by 10 experts, together with over 50 collaborators, the aim being to recommend measures for the design of a new transformative development model for the Canary Islands within the new outlook for the future brought about by the Covid19 healthcare crisis.

During his remarks, Rubio Royo asserted that “anything we do now must be concerned with the future”. However, he did acknowledge that currently “the priority is to resolve pressing issues which are focused on two broad areas: healthcare; and economic decline, unemployment and the closure of businesses”.

Rubio Royo emphasised the need to be ready to make the most of “the 200 billion euros Spain will receive” from European Union funds. To this end he highlighted the importance of having “a development model for the Canary Islands in the short, medium and long term – a sort of guiding star whose measures and actions respond to the criteria fixed by the European Union for the receipt and management of Next Generation funds”.

According to Canarias Importa, any proposal needs to be aligned with Europe, Spain and the Canary Islands, and with the green, blue and orange ecosystems permeating throughout. The importance of the latter was highlighted “as it deals with human capital, creativity, entrepreneurship, talent, public-private collaboration, and new governance models”.

Rubio Royo stated that the first step to take must be related to the key driving area: tourism, “but a smart and updated tourism”. He moved on to describe the Senior Resort School & Lab pilot project, a micro destination for seniors including not only hotel accommodation but also incorporating innovative related services which make the Canary Islands a global leader in this sector, enhancing a notable creative, digital, sustainable, and silver economy within its vicinity. This project would have an impact among the older population of the Canary Islands, which demographically is increasingly important: known as the silver economy.

As proposed, the Canary Islands need to move towards a R+D+i system which is an international benchmark and allows us to export tourism services. “The tourism industry is not only about more tourists coming, but is also about those products which we will export in a pioneering experience”. Similarly, he highlighted the importance of actions aimed at mitigating climate change and the need to be aligned with the Spanish and European Green Deals. The development of this pilot project should be coordinated, carried out under a coordinated public-private association and a starting point for the digitalisation of the Canary Islands, supporting 5G infrastructures.

The project, which is ready to be initiated, looks at 18 actions with their corresponding file, estimated budget and methods of financing.

The members of the Confederación Canaria de Empresarios agreed with the chairman of the Social Council, Jesús León Lima, and Francisco Rubio on the need to take action as soon as possible and without further delay. They also agree on requesting the creation of a technical office in which businesses are present alongside the Canary Island government, in order to be able to initiate all the projects and actions required to help us emerge from the current social and economic crisis.

The chairman of the CCE, Agustín Manrique de Lara, concluded the meeting stating that they are working closely with the Canary Island government so that the technical office, which we all believe is necessary, is operational as soon as possible. “Public-private collaboration will be crucial in the attainment and management of European funds”, he added.