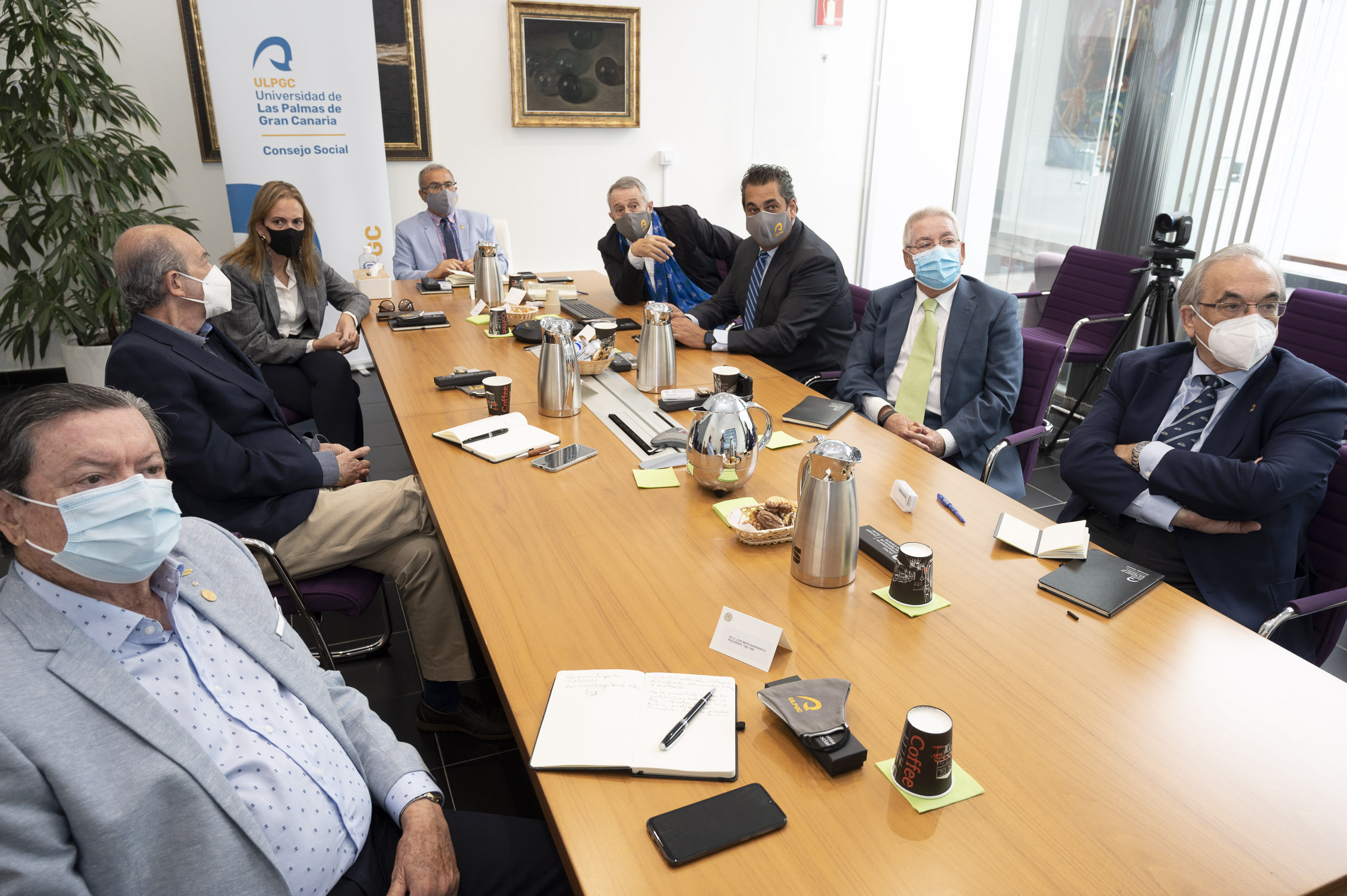 “Canarias Importa [The Canary Islands are Important] has transformed the ULPGC into an asset for the generation of ideas within our society and in leading this initiative the Social Council has lived up to its responsibility” noted the former chairmen José María Barrientos, Octavio Llinás, Aureliano Francisco Santiago, and Ángel Tristán, who met with the Social Council’s chairman, vice chairman, and secretary, along with Francisco Rubio Royo, honorary rector of the ULPGC and coordinator of the initiative. Present at the meeting convened by the chairman of the Social Council, Jesús León Lima, and held on Wednesday 12th May, were four former chairmen of this university body, which was founded in 1985: José María Barrientos (1985-1986), Octavio Llinás (1986-1993), Aureliano Francisco Santiago (2003-2005), and Ángel Tristán (2015-2019). The Social Council vice chairman, Ana Suárez Calvo, and secretary, Miguel Ángel Acosta, were also present. Chairman Jesús León Lima explained to his predecessors the origin of this initiative, which was developed at the height of the pandemic with the aim of connecting the islands and the general public to a more diverse and sustainable economy with higher added value, following last year’s economic and health crisis.

Francisco Rubio Royo based his remarks on the short-term proposals put forward by Canarias Importa in relation to an updated and smart tourism that propels the remaining economic sectors. On this matter he spoke of the pilot projects which the town councils of Mogán and San Bartolomé de Tirajana are working on together alongside the private organisations Travel Tech School by Amadeus and Cyborg Hotel Lab. The first of these projects, aimed at seniors who stay for extended periods, includes among other undertakings: the renovation of the accommodation, health programmes and adapted and inclusive sport, digital nomads, and remote working. In this respect Canarias Importa proposes the creation of a school that brings the tourism sector up to date with new skills and provides training in these. Furthermore, the Cyborg Hotel Lab is a project to gather unique data and to allow the model to be oriented towards smart tourism, with data relating to environmental regeneration and the new challenge of the green deal, with the aim of making the Canary Islands a global reference laboratory.

The former chairmen have congratulated the ULPGC Social Council for “having launched this initiative, which has transformed the ULPGC into an asset for the generation of ideas within our society and as the Social Council has lived up to its responsibility to society and the university during these times of crisis”. In the same way, they have judged the proposals as being “a magnificent overview and an exercise which is properly targeted towards what needs to be done in the Canary Islands at this moment, presenting concrete projects and being vigilant of their correct implementation”. They stressed that Canarias Importa offers “a good opportunity to have previous work at their disposal concerning the future of the Canary Islands, which can be executed by the authorities”. They also expressed their interest in the ‘administrative machinery’ allowing the projects presented in the expert group’s proposal document to be launched and implemented efficiently and swiftly.

The new ULPGC rector, Lluís Serra Majem, also attended the Social Council meeting in order to introduce himself to the former chairmen and to express his interest in receiving their input regarding the improvement of the university institution, in the same way as he receives those of the current chairman, “who I consider to be a great advisor”. During this meeting he praised the hard work undertaken by the Social Council through initiatives such as Canarias Importa, among others. This initiative, he stressed, “is an instrument which has been developed since the decisive moment of the pandemic and is essential during these moments of economic recovery in the Canary Islands given that it has been oriented towards the needs of the authorities, making it an extraordinary framework for work to take place over the coming years”.