Universities inject 16 billion euros per year into the Spanish economy 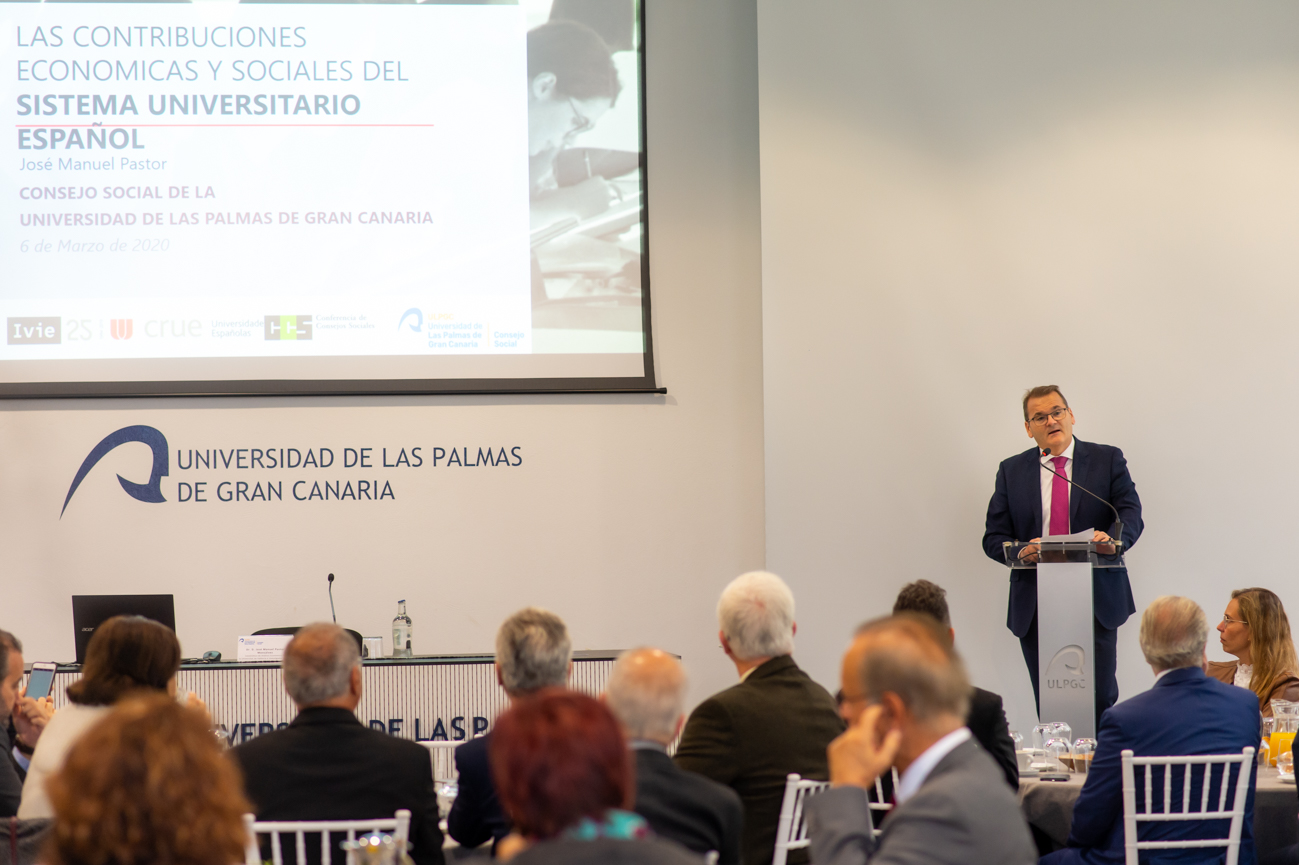 José Manuel Pastor, expert economist and editor of the report entitled “The Socioeconomic Contribution of the Spanish University System”, spoke on the socioeconomic impact of Spanish universities as part of the Breakfast Lectures organised by the ULPGC Social Council.

Professor José Manuel Pastor, researcher at the Valencian Institute of Economic Research (IVIE), today highlighted that “in the short term, 87 jobs are created for every million euros which public institutions provide to fund Spanish universities”. The professor gave a lecture at the ULPGC in which he concluded that “in the short and long term public universities are a profitable economic investment”. He highlighted that universities inject 16 billion euros per year into the Spanish economy. Moreover, in the long term the economic impact of universities is not only due to their generation of expenditure within their surroundings and as graduates contribute more money to public funds through their taxes, but is also due to the impact of their research and teaching on the offer of productive resources (human capital and investment in R+D) and, consequently, on economic growth. “There would be a higher activity rate and less unemployment within a region and more taxes would be collected. Furthermore, universities are a social ladder which allow young people to improve their socioeconomic status in comparison with that of their parents”, Professor Pastor explained. Additionally, the higher salaries earned by Spanish graduates mean more taxes are collected in Spain, which is calculated at an additional 25 billion euros per year. This all leads to the conclusion that “society receives 4.3 euros for every one euro invested in the Spanish university system”.

José Manuel Pastor is editor of the report entitled “The Socioeconomic Contribution of the Spanish University System” commissioned by the Conference of Social Councils and the Conference of Spanish Rectors. The lecture given by this national expert took place as part of the Breakfast Lectures which the ULPGC Social Council regularly organises. The chairman of the Social Council, Jesús León Lima, thanked Professor Pastor for his presence at the ULPGC, because “the results of the report are relevant to universities and for society in general, as they quantify not only the direct and indirect impact of our universities in our country’s economy, but also assess their influence in reducing social inequality.”

For the chairman of the ULPGC Social Council, who was accompanied by all members of the Rectorate team along with members of the public and members of the Canary Island business sector, “placing the creation, communication and dissemination of knowledge at the centre of the social and economic undertakings of a country is always a guarantee of further development”. The report demonstrates that the “process of transitioning towards structures founded more on knowledge is crucial in increasing the competitivity of an economy and the standard of living of its people ”.

The ULPGC Social Council’s Breakfast Lectures is an initiative of a strongly social and cultural nature and each edition welcomes renowned experts from the national and international university sphere to address the role and aims of Spanish universities. For this edition the ULPGC Social Council extended an invitation to representatives of the university community, researchers, ULPGC sponsors and partners, and representatives of public institutions and organisations and the business, social and cultural sphere.