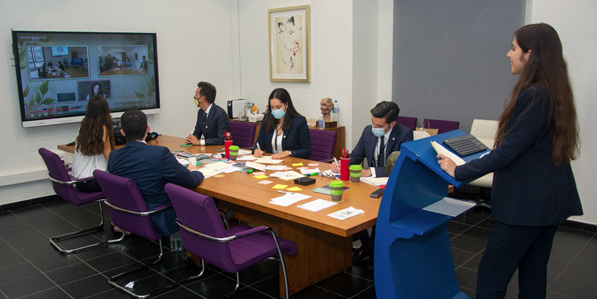 After being crowned winners of the ULPGC’s 12th Debate League in April 2019, this group, comprised of students studying the undergraduate law degree, the joint degree in business administration and management and law, and the masters in law, will face the team from the University of Zaragoza in the quarter-finals.

The winner of the 12th ULPGC Debate League, Team Paideía, will represent the ULPGC during the 2020 edition of the Spanish University Debate League (LEDU), which will be held online this coming 17th and 18th of September due to the extraordinary measures imposed in the face of the exceptional circumstances within the country due to the pandemic.

Team Paideía is made up of two students studying the ULPGC undergraduate law degree, Ada Santana and Luís Guerra; two studying the joint degree in business administration and management and law, Patricia Santana and Raquel Pérez; and a student studying the masters in law, Alejandro Betancor. They are captained by the ULPGC graduate Ignacio García.

The Social Council is the driving force behind this educational initiative within the ULPGC, which in 2019 already celebrated its 13th anniversary. For this reason, on the days when debates are taking pace, Team Paideía will use the ULPGC Social Council’s Meeting Room located in the institutional headquarters. Here they will participate in their initial debate contests against teams from other Spanish universities. They will be accompanied by the director of the Debate Society, Sara M. González.

The debates up to and including the semi-final will be streamed. If the health situation allows, the final will be held in person on Sunday 27th September in front of expert judges and guests such as Albert Rivera (Executive Chairman of Martínez-Echevarría Lawyers and ex-Leader of Ciudadanos), Theresa Zabell (double Olympic champion), and representatives of various brands and corporations.

During this edition of the league participants will respond to the following extremely topical question in the style of an academic debate: are appropriate measures being taken to achieve the objectives of the 2050 climate change strategy?

The primary aim of the university debate leagues has been to promote, among students, the art of public speaking, dialectics and debating, along with critical thinking. These have all become cornerstones of a university academic education.