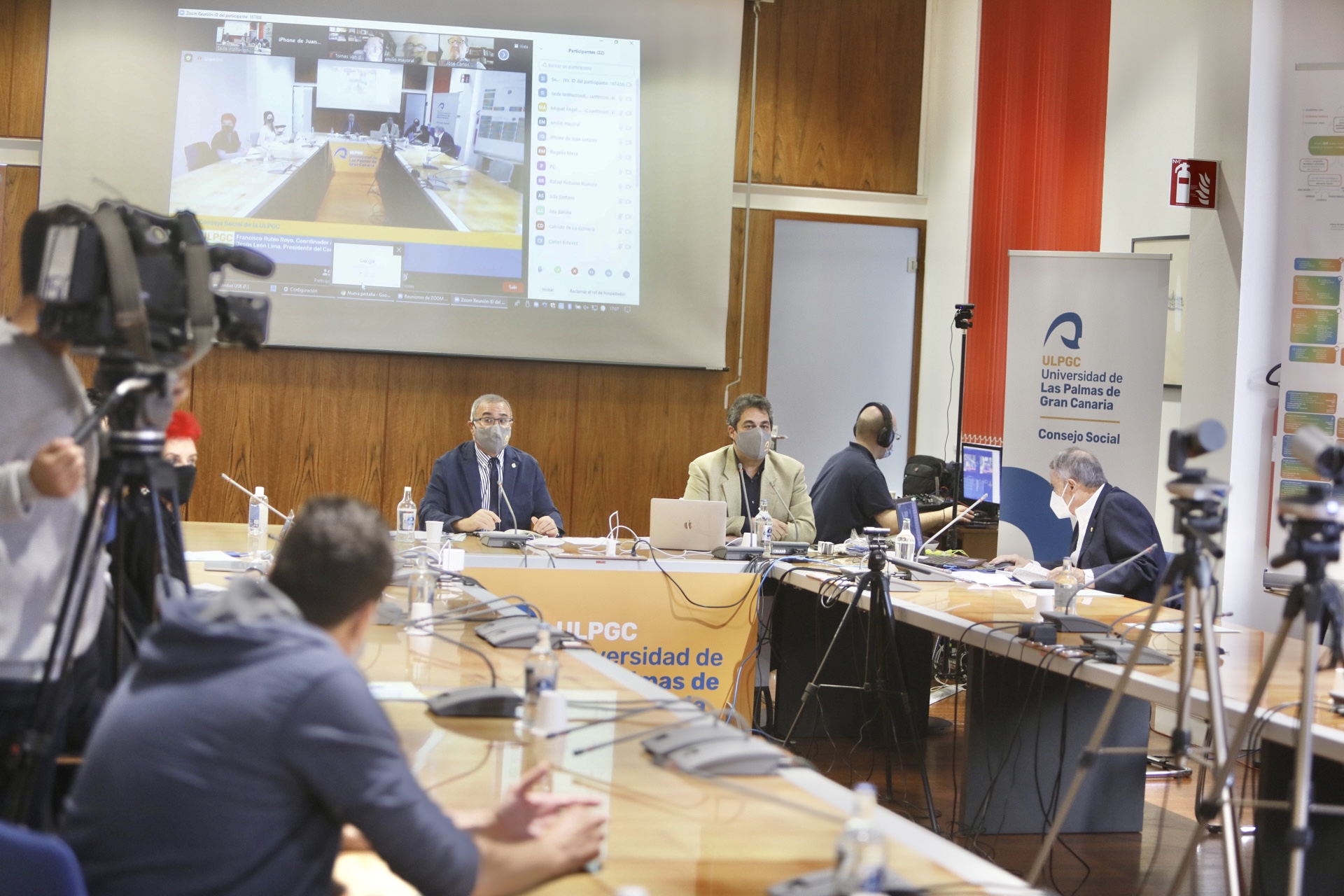 The University of Las Palmas de Gran Canaria’s Social Council plenary today learnt of the proposals put forward by the Canarias Importa [The Canary Islands are Important] initiative, the aim of which is to propose measures for the design of a new development model for the Canary Islands within the new outlook for the future brought about by the Covid19 healthcare crisis.

In an extraordinary plenary session, with some members meeting face-to-face and others joining the meeting online, the conclusions were presented by the chairman of the Social Council, Jesús León Lima, and the honorary rector and coordinator of the initiative, Francisco Rubio Royo, along with some of the experts who have worked on this project. These conclusions were drawn up by 10 experts, in addition to over 50 contributors who have been working on this initiative since June of this year.

The chairman of the Social Council, Jesús León Lima, stressed to the plenary that the Canarias Importa proposal allows our islands to be connected to prosperity and an economy with greater added value and increased diversity and sustainability. “It is an invitation to build a more resilient, cohesive, fair and inclusive society, with new business and social modelsnd new methods of working within all government agencies, between these and private companies, and between the government agencies, private companies and social initiatives. It is also a call to civil society to increasingly take a lead in decision making, as only through this will it be possible to achieve the collective change in mentality which is required to go down new paths”. León Lima said he is aware that the points raised re not the only possibilities and that new directions, strategies, endeavours, or ‘umbrella’ projects could be included, yet “we are certain that these proposals should be taken into account within any future model which is put forward”.

The chairman of the Social Council added that completing the proposed process “will not be easy as it requires genuine change to our ways of thinking and acting in order to place value on ur skills and resources. However, beginning the process is within our reach and we should do so without delay as time is passing at an alarming rate”.

León Lima revealed that the document containing the conclusions of this initiative will, during the coming months, be presented to public authorities, political, economic and social stakeholders, and to the general public.

He closed his remarks by thanking the Canarias Importa facilitators for their work which, he said, “has been extensive” and highlighted their enthusiasm and altruism “which is evidence of a strong commitment to our islands. The members of the Social Council wish to express our recognition and sincere gratitude for the sense of social responsibility which they have demonstrated once again. For them and certainly for us all, the Canary Islands are Important”.

For his part, Francisco Rubio Royo – who has coordinated and steered both the team of experts and the ‘nerve centre’ hich has made this possible – noted that Canarias Importa is the outcome of a request made by the Social Council to a group comprised of professionals from both inside and outside the university. “They asked us to provide collective ideas and a proposal, taking into account the impact that Covid19 has, is having and will have in the Canary Islands and across the world.

Along this line Rubio Royo explained that, from the outset, “we decided to do something which is unique and different from the many existing initiatives. This is because we are dealing with a turning point that could speed up the paradigm shift that is needed in the Canary Islands: to be more digital, sustainable and diverse, with less dependence on tourism. We have not focused so much on the question of what to do – on this issue we have supplied an objective, an identity, and some principles, as well as the “core areas”, in order that we may find our bearings while implementing change – but rather on the question of how”. We contribute ideas as well as a proposed model to enable the change the Canary Islands need to be initiated. This does not focus on wanting an isolated change now, but rather on wanting continual change and to make improvements together”.

Rubio Royo defined Canarias Importa as a process of diverse and sustainable development for the Canary Islands which is transformative, open, dynamic, flexible, ongoing and resilient. It is based on 10 strategic elements, grouped into three categories: core elements, strengthening elements, and driving elements. He concluded by saying that the results they hope for are: to create a more diverse production system, to drive emerging sectors, and to advance existing sectors with potential.

The conclusions indicate that this is an “ongoing [initiative] for the sustainable, diverse and inclusive development of the Canary Islands”. A summary of the actions which should be taken has therefore been created. These were already known but not implemented. Three “core areas” – blue, green and orange – were also provided, symbolising the paradigm shift. The proposed model is based on providing an answer to short, medium, and long term requirements. Recommended courses of action have been designed for this purpose. For the long term is a map outlining the relationship between input-output actions, which provides an intelligent, positive and expansive tool for making decisions on future actions. For work concerning the medium term there is a strategy based on 10 programmes with 30 initiatives, whose role is to connect and integrate the endeavours of different institutions in order to optimise and expand allocated resources. In the short term, a collection of 10 pilot actions allows for change to begin being undertaken, integrated within an ‘umbrella’ programme called “Senior Resort School & Lab” in order to positively connect all the initiatives and to take advantage of the strength of tourism to drive the paradigm shift. Finally, a governance structure is proposed for the implementation of change: The Vital Nerve Centre. This would genuinely allow for the transition from theory to action.

The programmes and undertakings selected for Canarias Importa fulfil five criteria: to prioritise those with the greatest potential for expansion; to seek a balance between diversifying the production system, driving emerging sectors, and developing existing sectors with potential and the capacity to improve; to select those which could theoretically have a balanced economic, social, and environmental impact; to seek a balance between the three categories of components within Canarias Importa; and to facilitate a dynamic and stable balance between the three possible scenarios for the Canary Islands: short term (2020), medium term (2025), and long term (2030 and beyond). Canarias Importa is situated within the second and third of these scenarios, with its short term in 2023, for which reason it is necessary to bridge the gap between 2020 and 2023, particularly with regards to the first step to be taken concerning smart tourism.

THE TEAM OF FACILITATORS: Miguel Ángel Acosta, general secretary of the Social Council, industrial engineer and doctor of economic and business sciences; Javier Arístegui, professor of ecology at the ULPGC; José Manuel Baltar, former regional minister of health for the Canary Island government and healthcare management specialist; Patricia Barber Pérez, tenured lecturer at the ULPGC and senior researcher for the Health and Public Policy Economics Research Group; Jimena Delgado Tramona-Hernández, former manager of SPEGC [the Organisation for the Economic Promotion of Gran Canaria] and former chairman of the ZEC [Canary Islands’ Special Zone], expert in public administration, and innovation and internationalisation management; Natascha García Dávila, manager of ADEPSI;  José Juan González, managing director of CANARAGUA; Manual Lobo Cabrera, former rector of the ULPGC and professor of modern history at the ULPGC, Rafael Pérez Jiménez, professor of signal theory and communications at the ULPGC, head of the IDeTIC [Institute for Technological Development and Innovation in Communications] university institute; Ana Suárez Calvo, executive director of the Germán Suárez Investments Group and vice chairman of the ULPGC Social Council; Lourdes Trujillo Castellano, professor in Economics at the ULPGC, head of the ULPGC port-maritime organisation [Cátedra Marítimo-Portuaria], and Edu William, entrepreneur, Corporate Venture Builder and associate lecturer with a doctorate at the ULPGC.

THE VITAL NERVE CENTRE: Evelyn Alonso Rohner, chair of the Sergio Alonso Foundation and architect with a doctorate from the ULPGC; Francisco Mario Hernández Tejera, professor of computer sciences and artificial intelligence at the ULPGC and SIANI [University Institute of Intelligent Systems and Numeric Applications in Engineering] (quality, efficiency and sustainability) research institute; Francisco José Vázquez Polo, professor of quantitative methods for business and the economy at the ULPGC and the TIDES [The University Institute of Tourism and Sustainable Economic Development] research institute (Bayesian Statistical Techniques and Decision Making in Economics and Business); Eduardo Wiliam, and Franciso Rubio Royo.